MH CET Law 2019 Topper Interview: Finishing first in a race is a dream of everyone who takes part in it. This year this dream became a reality for Bharat Harne (AIR 1 in MHCET Law 2019). Bharat Harne is this year’s topper for MH CET Law 2019 5-year. MH CET Law 2019 for 5-year programme was conducted on April 21, 2019. The examination was conducted by the government of Maharashtra for admission to the 5-year integrated law programme offered by the Universities of the state. The result for MH CET Law 2019 5-year programme was declared on May 13, 2019. The boy from Bhopal scored a whooping 138 marks in the examination. In an exclusive interview with Careers360, the boy who loves to read shares his success mantra and gives away his secrets. Read the complete article to know how Bharat Harne won the race to his dream college. 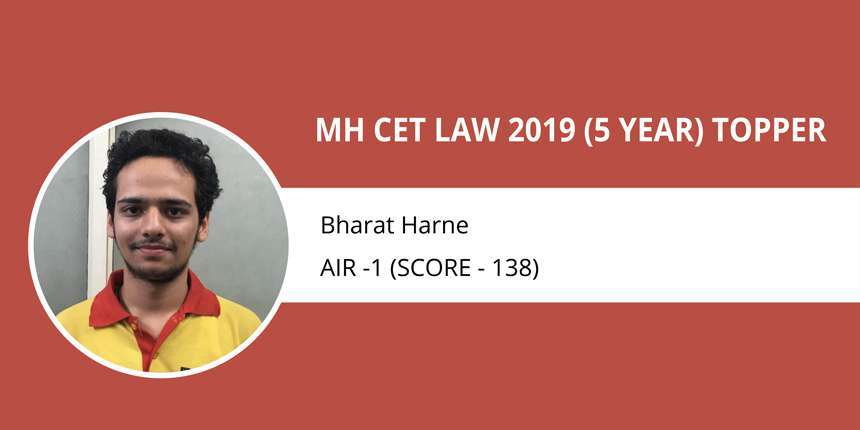 Careers360 : Congratulations on qualifying MH CET Law 2019 with such good grades. How do you feel being the all India topper?

Bharat: I feel good, but I will feel better if I could replicate the same performance in all the other law exams.

Careers360 : What made you choose a career in law?

Bharat: A career in law was the last thing on my mind. I never imagined that I would pursue a career in law. Towards the end of Class X, I started reading about law. It was then that I just felt this is the thing for me. I found the subject interesting and I could do it.

Bharat: I started preparing for the law entrances in the end of Class XI academic session. I prepared throughout my Class XII. but my performance was not as per my expectations in the law examinations held that year.

Careers360 : Apart from MH CET Law 2019, which other entrance exams are you taking? How was your performance in those?

Bharat: At the initial stages of preparation, I had no strategy. My preparation was scattered, and this cost me a lot. Then I realized that having no preparation strategy was a mistake. After CLAT 2018, I took a year off and joined a coaching institute in Bhopal. One major advantage to joining a coaching is that they prepare a strategy for you. I just followed the strategy and it worked for me.

Careers360 : How did you prepare for legal aptitude section?

Careers360 : What was your preparation strategy for English?

Bharat: I have a habit of reading, so reading comprehension was not much of a problem for me. I read a lot,I read throughout my drop year. I read regularly and as much I can. For vocabulary, I referred to a book called ‘word power made easy’. This book was a big help and I would suggest this book to everyone who wishes to appear for law entrance examination. For grammar, I read Wren and Martin and practiced a lot of questions. This pretty much covers the English section.

Careers360 : What was your strategy for general knowledge section?

Bharat: For General knowledge I read the newspaper. I read the HIndu regularly and religiously throughout the year. In Fact I have been reading the Hindu for almost two years now. Initially I ignored the newspaper and that was a mistake because it cost me a year. So this is something that I would recommend to everyone, stick to the newspaper. It may be any newspaper.

Careers360 : What role have mock tests played in your success?

Bharat: Mock test have probably played the biggest role. Through mock tests you can gauge your preparation and analyse what you have completed. Merely studying a subject won’t fetch you marks, you have to learn how to implement it during a mock. There is a timer in the mock test, which gives you a sense of time slipping away while attempting the questions, that is something that a student has to master. Mock test gives you a real experience and is sort of a reality check for you.

Careers360 : What was your preparation strategy for reasoning?

Careers360 : What are your hobbies?

Bharat: I like to swim and listening to music. I used to play tabla, but I gave up the hobby eventually.

Careers360 : What was your schedule while preparing for the entrance?

Bharat: I used to get up early and start studying at around 7:30 am. I used to study till 1, then I had my lunch. I had classes from 1:45 pm to 6 pm. After coming back home, I read the newspaper. This was followed by a recreational activity like reading a novel.

Careers360 : What did you do to de-stress yourself?

Bharat: To de-stress, I read a book or watched tv. But this did not exceed 40-50 minutes a day, because I consider that more than that is a waste of time.

Careers360 : What advice would you like to give the future MH CET Law aspirants?

The Directorate of Higher Education (DHE), Maharashtra, has ex...

Conducting a State Level Entrance exam through proctored method might be difficult. But again this is a decision that needs to be taken by the State Government lf Maharashtra also keeping in mimd the no.of Students who might not have access to a Computer when compared to their counterparts. So we might have to wait and hear officially from the Concerning authorities tgan speculating.
Read More
Answer

will the MHCET Law this year be conducted online because of the covid situation?

It's been announced by Directorate of Higher Education, Maharashtra that MHCET exam for LLB 5 years will be conducted on July 24th and for 3 years it is scheduled on August 7th. Note that the above exams are going to conduct in online mode only.

Application process for MHCET Law has been extended upto May 30th.

Due to the pandemic of covid 19 the MH CET LAW 5year LLB exam which was scheduled to be on 12 April 2020 get postponed till further notice. The application date for MH CET LAW 3 year LLB and and other exams have been extended so my question is is there any possibility of postponement of these exams

There are chances that the exams will be postponed.The revised  date for MAH LLB (5 years) CET will be announced soon.The exams will be held only after the pandemic is contained.Visit the official websites for more updates :

For 5 years integrated llb program the registration has been closed and the Date of MAH-LL.B (5 Years)-CET 2020 exam has not been postponed. New dates has not been declared yet. For updates regarding the exam keep visiting the official website of Mh -cet.

will ews certificate help me with the cut off scores, will the cut. off be less for ews category students in MH cet Law...?? does mh law cet accept ews certificate??

Central government started the reservation quota for Economically Weaker Section of General category. According to this quota every authorized institution in India will reserve some seats for EWS candidates.

I hope this answer helps you.

All About MH CET Law

Your MAH AAC CET brochure has been successfully mailed to your registered email id .