An Open Letter to GGSIPU VC on ‘communal’ question

Careers360 concerned about the ‘communal question’ that appeared in the end-term examination of GGSIPU LLB programme, has written an Open Letter to the Vice Chancellor of GGSIPU, seeking answers to some important questions.

You might have come across the embroiled ‘communal’ question that appeared in the GGSIPU LLB third semester end-term examination held for Law of Crimes-I subject in Chandra Prabhu Jain (CPJ) College of Higher Studies and School of Law, Narela. 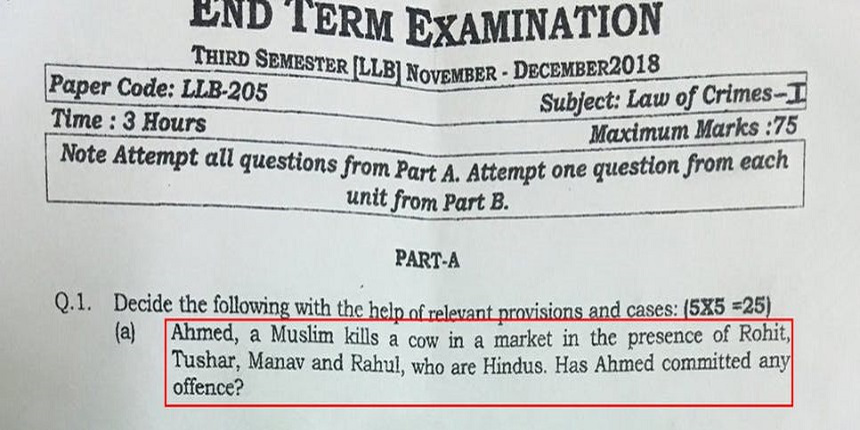 The question read, “Ahmed, a Muslim, kills a cow in a market in the presence of Rohit, Tushar, Manav and Rahul, who are Hindus. Has Ahmed committed any offence?”

When asked about the question, Prof Neeta Beri, the College Principal was quoted saying, “I was not aware of this paper as I have been on leave, but I don’t think I need to raise a voice against this. It’s a question of law. Any situation can arise, and the court can be asked to take a decision on the same.”

Such a question carrying five marks doesn’t suit the ethical-integrity and ethos of a reputed educational institution like Guru Gobind Singh Indraprastha University and its affiliated colleges. Knowingly that the Hindu-Muslim community scenario in the country is already in a catch-22 situation, such question might not have been asked seeking a logical response from a student.

There are a few observations that we have come across. Just putting it before you.

Observation 1 – The question was put in the section–Part A which is supposed to be a mandatory one where students need to attempt all the questions.

Observation 2 – This was the very first question of the end-term examination paper which means a student will have to start answering the paper with a ‘negative’ and communal type question.

Observation 3 – The word ‘kills’ is more barbaric, showing a definitive intention to malign the said community. However, another suggestive word, ‘slaughter’ would have been something legally accepted.

We, also could not find answers to a number of questions, which I would like to point out, believing you would be able to help us all.

Question 1 – In a world full of questions that an educational institution could ever ask, how did the Guru Gobind Singh Indraprastha University (GGSIPU) Law of Crimes-I end-term examination had such a communal question?

Question 2 – What was the intention of the question catechized in the GGSIPU third semester LLB end-term examination, having known that the nation is going through the sensitive phase when you have controversial issues like beef-bans, Ram Mandir, Babri Masjid, etc.?

Question 3 – How did the question appear in the LLB end term examination? Wasn’t it cross-verified or didn’t it hurt the eyes of other officials from the examination department, when they scrutinized the end term paper?

Question 4 – The university officials were quoted saying that the question has been nullified. But isn’t the university concerned for its reputation as an educational institution? Does the university’s responsibility end with nullifying a ‘grave erroneous’ question?

Will you rise up Sir! to address the issue? Or will you let such questions come up in the name of ‘situational questions’ on cost of the institutional reputation and students’ future?

We hope you make the right call.

How to prepare for reading section of LSAT India: Expert advice

Do’s and Don’t on the LSAT-India exam day

Is the migration certificate from digilocker account is valid in ipu at the time of admission?

Hello student the migration certificate in digilocker is valid and original but its a soft copy of certificate which you can upload on any website at the time of filing application but at the time of admission the institution will ask you to show the hard copy /original certificate.

when registration in colleges/univ in delhi will start for 12th pass outs. for example guru Gobind Singh Indraprastha University has started online registration

According to the guidelines of University Grants Commission(UGC) all colleges/universities all over the India including Delhi will offer admission to 12th pass out students after 1st September 2020.

Hello. What is the date of GGSIPU exam (ba llb)

Dear Shivam, Previously the scheduled date for GGSIPU exam was 26th May 2020, but due to corona pandemic, it has been postponed and the final date has been announced it.

For more information, keep a regular check on the official website

May be there is some network issue and the server can be down. This can be the problems because many of them visit the website at a time

So wait for sometime and then try again

Or else, the helpline number as well as gmail is provided you can go through it

what is the syllabus of ipu Delhi CET exam? I need full CET syllabus.

Can you help us in understanding which course's syllabus are you looking for?

View All Questions
Have a question related to IP University ?

Your IP University brochure has been successfully mailed to your registered email id .