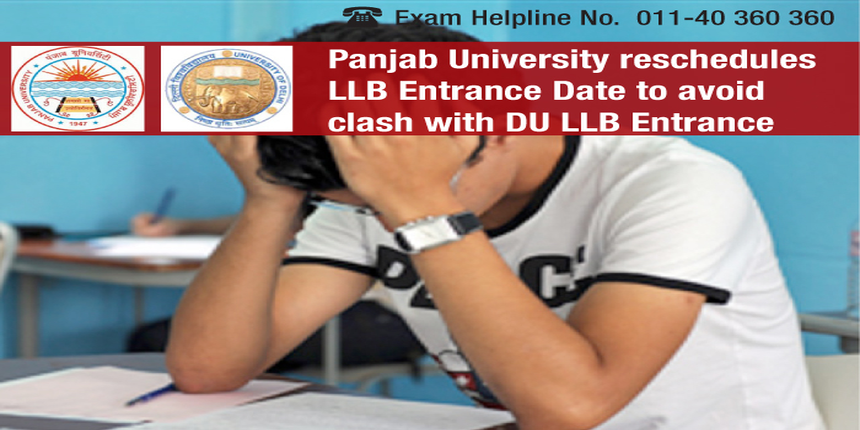 Panjab University
who had earlier announced their LL.B entrance exam on the same date chosen by DU LLB Entrance Exam 2014, have now announced new date, making possible for aspirants to appear for the Delhi University LLB entrance exam for this academic year.

Earlier, both the universities had announced the exam dates on the same day, i.e. June 8, 2014. While Delhi University was first to announce the date, Panjab University notified the exam on same date, making it impossible for examinees to appear for both these exams.

UPES, College of Legal Studies has invited applications for admissions to the various law courses. Click here to Apply Online.

Alliance School of Law is inviting applications for admissions for the academic session 2014. Click here to Apply Now.

Mody University of Science and Technology has invited fresh registrations for the undergraduate law courses for academic session 2014. Click here to Register Online.

After the dates clashed, the candidates aspiring to take these exams were in dilemma on choosing between these two exams. However, Panjab University has changed the date of LLB Entrance Exam keeping in view the problems caused to the law aspirants.

Careers 360 had reported on both exam dates falling on the same day and asked for response from concerned authorities on the possibility of re-scheduling the exam dates.

While Delhi University justified its announcement saying, it did not need to relook into the date as it was announced much in advance to the other exam date. “We fix up our dates as per Delhi University guidelines and decided 8 June 2014 as the DU LLB 2014 Entrance exam date.” said, Professor Rup Lal, Dean, (Examinations) University of Delhi. Moreover, he confirmed that the exam will take place on this very date only.

I am a graduate from Andhra Pradesh. Am I eligible to write PU LLB entrance? If so, are there any seats reserved for residents of Punjab?

Here is the eligibility criteria for PU LLB:

So, yes, you can apply for the same as it does not state otherwise anywhere.

when online application is avaliable

Punjab University will conduct entrance exam for its LLB course tentatively in June 2020 and the online application forms of the same will be available on the website from April,2020(Tentative). The test centres for this exams will only be in Chandigarh. For more details about the same i have attached a link for your reference, https://law.careers360.com/exams/pu-llb-entrance

can we have the last years paper for practice

every year punjab university conducts llb entrance test, the llb entrance test for 2020 wil be held on 22 june, 2020 tentatively. I would suggest you to follow various stat wise entrance test papers with pullb previous years test. as the question can be repeated. follow the below link to download the sample papers,

please provide me pu llb entrance exam notes or any site or app.

View All Questions
Have a question related to PU LLB Entrance ?

Your PU LLB Entrance brochure has been successfully mailed to your registered email id .