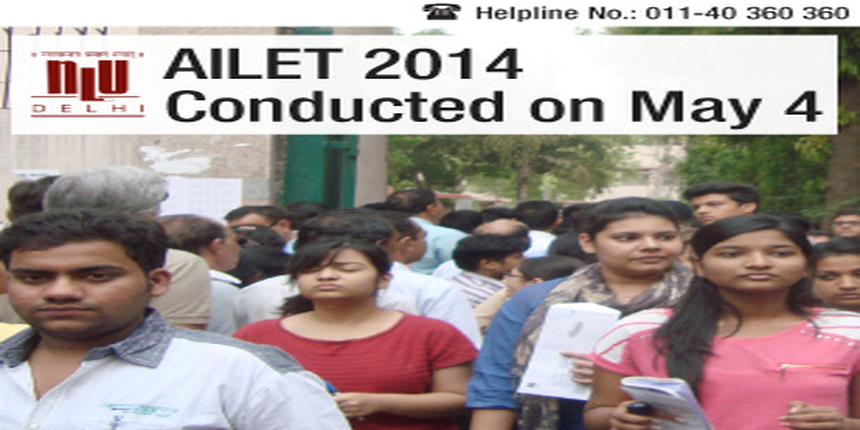 AILET 2014, the second most sought law entrance exam after CLAT 2014 was conducted by National Law University, Delhi on May 4, 2014 across the country. According to NLU Delhi, 14121 candidates had registered for the AILET 2014. AILET, the All India Law Entrance Test being conducted for admissions in the five year integrated, B.A. LL.B programme in National law University, Delhi. As scheduled, AILET 2014 paper carried a total of 150 multiple choice questions from five different sections. Each of the section but Elementary Mathematics carried 35 marks. However Elementary Mathematics covered 10 marks. Each question carried 1 mark and there was negative marking for the wrong answers.

The AILET 2014 will shortlist candidates for admissions to B.A. LL.B programme in NLU Delhi as per the cutoff to be declared by the law university. According to the National law University Delhi, there are 80 seats for BA LLB programme out of which 10 seats are reserved for the foreign nationals on direct basis and 70 seats to be filled in through AILET 2014.

Harsh Gagrani, Director of LegalEdge Tutorials, said that “The overall paper was easy but lengthy and hence the cutoff could rise this year.”

According to some candidates who spoke to Careers360, the overall difficulty level of the paper was moderate. Legal Reasoning section had tougher questions than the other.

Candidates can search for AILET 2014 Answer Key  to match their response and calculate their score.

Stay tuned to law.careers360.com for more news and feature related to AILET 2014 Exam