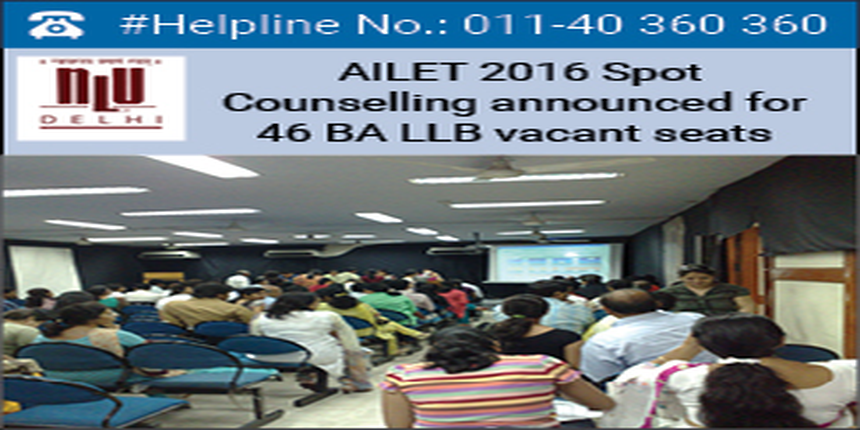 AILET 2016 counselling for spot round is scheduled to be held on June 25, 2016 (from 9:30 am) for admissions to as many as 46 vacant seats in BA LLB programme for the academic year 2016. National Law University Delhi (NLU-D) has published a list of candidates who have been called to attend the spot round counselling of AILET 2016 at the university campus on the scheduled date. As per the AILET 2016 spot round counselling list, a total of 33 BA LLB seats are vacant in General category, while 7, 5 and 1 seats in each of the Scheduled Caste (SC), Scheduled Tribes (ST) and Persons with Disability (PwD) categories, respectively.

NLU Delhi has called as many as 174 candidates for AILET spot round counselling where a total of 125 AILET 2016 test-takers have been invited from the General category, 26 from SC, 18 from ST and 5 test takers from the PwD categories.

“The spot counselling of AILET 2016 will be held at the university campus sharp at 9:30 am of 25th of June, 2016. The shortlisted candidates will have to report in the Auditorium of the NLU to mark their attendance in person and the results of AILET 2016 spot counselling will be declared on the same date,” informed the NLU Delhi deputy registrar.

As per NLU Delhi official announcement, no candidate reaching the venue after 10:00 am of June 25, 2016 will be allowed to mark their attendance or participate in the counselling, under any circumstances. Moreover, the candidates participating in spot round of AILET 2016 counselling will have to bring all the necessary documents along with a demand draft of Rs. 50,000 (Rupees Fifty Thousand) drawn in favour of ‘Registrar, National Law University Delhi’, payable at Delhi.

What after AILET 2016 Spot Round Counselling?

The candidates who get selected in spot round counselling of AILET 2016 will be required to pay the admission fee by July 5, 2016, failing which the provisional admission will deemed to be cancelled and the deposited fees will be forfeited.

All India Law Entrance Test (AILET) is the law entrance exam conducted by National Law University Delhi (NLU-D) for admissions to as many as 81 seats in BA LLB prgrammes at the NLU.