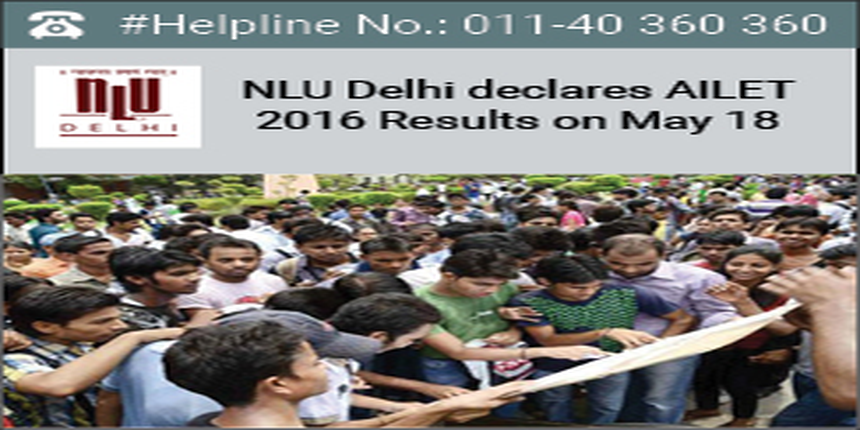 All India Law Entrance Test (AILET) 2016 Result has been announced by National Law University of Delhi (NLU-D) on May 18, 2016 at 06:22 pm. As per the official announcement of NLU Delhi, as many as 73 candidates have qualified for five-year integrated law programmes in the University. Candidates can check here the results of BA LLB admission test of NLU Delhi for the admission year 2016.

Earlier, the result of AILET 2016 was scheduled to be announced on May 15, however, which was postponed by three days.

The candidates, who had appeared for AILET 2016 on May 1, can check their results through the official result pdf of AILET as published below in this page. AILET 2016 test-takers need to find their name in the AILET results pdf list through their roll number and date of birth.

The results of AILET 2016 also specify the category of candidates and marks obtained in the law entrance test of NLU Delhi.

The Convenor also said that the individual letters are being sent to the qualifying candidates of AILET 2016. “Individual letters are being dispatched to the candidates through registered / speed post to remit admission fees by June 10, 2016. In case, the candidates fail to remit the fees by the scheduled date, their provisional admission candidature automatically stands cancelled,” said Dr. G.S. Bajpai, AILET Convenor.

AILET is All India Law Entrance Test conducted by NLU Delhi for admissions to as many as 83 BA LLB seats including 52 for General category candidates.