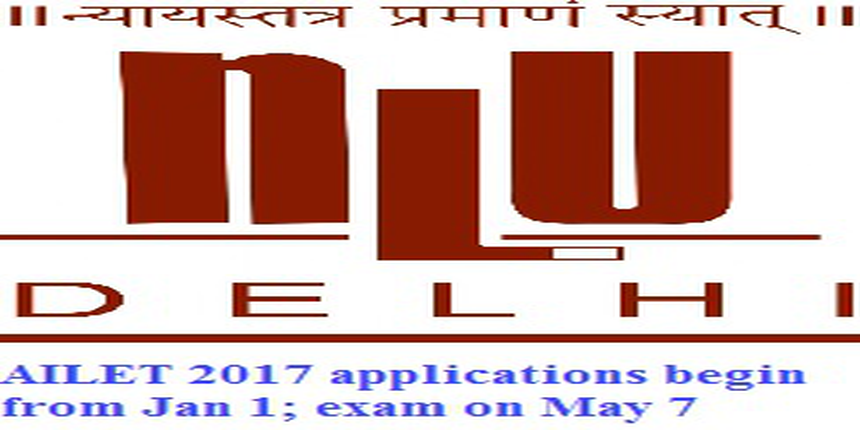 AILET 2017 will be held on May 7 as National Law University Delhi (NLU-D) will be inviting application forms for law admissions from January 1, 2017. The applications, as per the NLU Delhi AILET 2017 notification will be announced for both undergraduate and postgraduate programmes.

NLU Delhi has published exam notification for All India Law Entrance Test (AILET) 2017 on October 6, 2016, where the NLU Registrar, Dr. G.S. Bajpai has mentioned the exam timings. “The entrance exam for BA LLB, LLM, and Ph.D programmes through AILET 2017 will be held on May 7 scheduled to begin at 3:00 pm and end at 4:30 pm at various centres across India,” informed the Registrar.

Adding on to the information, he said, “The application forms for AILET 2017 will begin from January 1, 2107.”

Careers360 had written to the NLU Delhi officials regarding AILET 2017 on October 5, after which the official notification has been published.

AILET 2017 eligibility criteria has remained same as last year, with no changes as law aspirants applying for BA LLB programmes will need to qualify 10+2 board examination from CBSE or equivalent examination boards with a minimum passing percentage. Those applying for LL.M programmes need to have an LL.B degree from any recognised law institution.

NLU Delhi will be holding AILET 2017 offline on the scheduled date where applicants will have to attempt as many as 150 questions within a time limit of 90 minutes, i.e., 1 hour and 30 minutes. The result of AILET 2017 is expected to be declared in the third week of May. The exam is conducted for offering admissions to 83 BA LLB and 50 LLM seats.

Stay tuned to law.careers360.com for more news and updates on AILET 2017