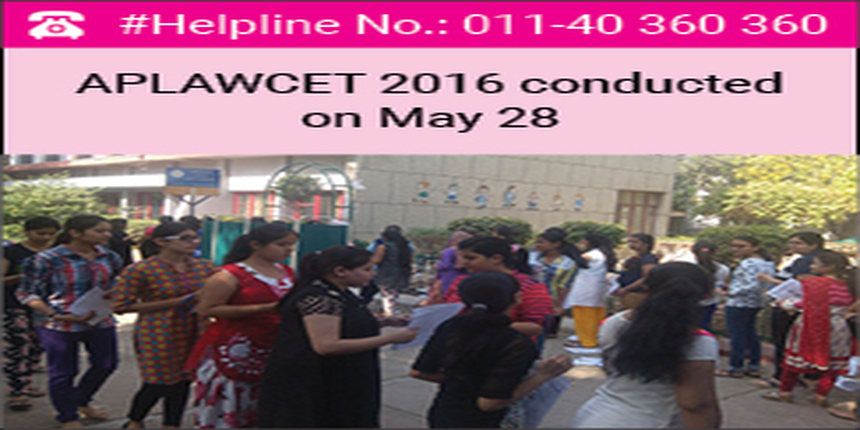 AP LAWCET also known as Andhra Pradesh Law Common Entrance Test was conducted by Sri Krishnadevaraya University on behalf of Andhra Pradesh State Council of Higher Education (APSCHE) on May 28, 2016. The state level law exam was conducted in paper-pen mode at different exam centres of 10 cities in the state.

As per the exam pattern of AP LAWCET 2016, the exam was conducted for duration of 90 minutes which began at 10:00 am. The offline paper of AP LAWCET 2016 had as many as 120 questions carrying one mark each. The questions were provided in English and Telugu languages.

The questions covered three sections including General Knowledge & Mental Ability, Current Events and Legal Aptitude. While, GK and Current events sections consisted of 30 questions each, there were a total of 60 questions in legal aptitude section.

The exam conducting body would not follow any negative marking policy; hence no marks would be deducted for any incorrect response, however, if any question was attempted by more than one option, the same would be regarded wrong and no marks would be awarded.

AP LAWCET 2016 Answer Keys will be released in the first week of June as the results for Andhra Pradesh Common Law Exam will be conducted by the second week of June 2016.

APSCHE conducts AP LAWCET for admissions in 3-year and 5-year integrated LLB programmes at various law colleges in the state. There are over 11000 seats on offer.

Stay tuned to law.careers360.com for more news and updates on APLAWCET

is lawcat exam capable to accept in msu ???

The Maharaja Sayajirao University of Baroda,conductss its own entrance test for admission to BA-LLB(Hons) and LLB.

Eligibility for BA-LLB(Hons): Candidate needs to have passed 10+2 from a recognized board with 45% aggregate.

Eligibility for LLB: Candidate needs to have passed graduation with at least 45% marks for general,40% marks for SC/ST category from a recognized University.Final year candidates are also eligible to apply.

Eligibility for BA LLB 5 years is aspirants must pass class 12 with minimum 45% marks from any stream from a recognized board.

And for 3 years LLB students must hold a Bachelor degree in any discipline from a recognized board with minimum 45%marks.

For more updates on APLAWCET please refer the link mentioned below