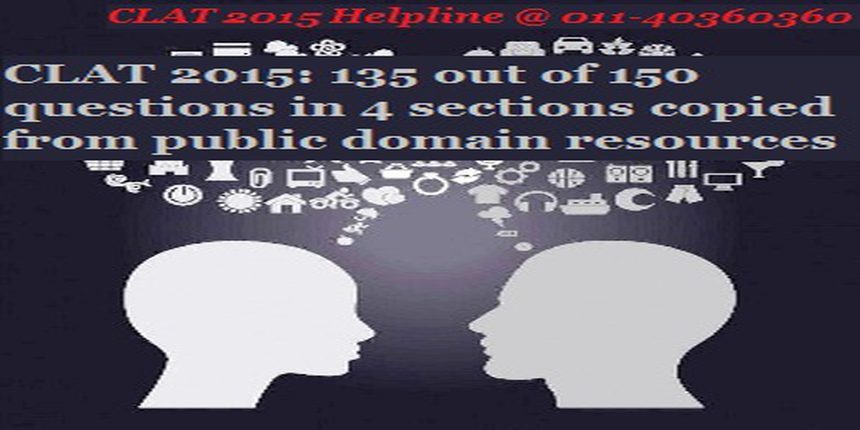 In a stark revelation into CLAT 2015, more than 135 questions have been found to be copied from online knowledge sources with a few questions carrying errors also that existed in the original resources. Further, the General Knowledge section of 50 questions had as many as 27 questions copied from question bank of a particular website.

A close scrutiny of the question paper, after it was released by CLAT authorities on June 2, revealed that most of the questions in English, General Knowledge, Maths and Logical Reasoning were copied from different exam-preparation related websites.

According to experts, over 90 percent of questions from the 4 sections of CLAT 2015 question paper was copied from the resources already available in the public domain. Careers360 brings you the section-wise details of the Total number of questions Vs Number of copied questions:

The experts have claimed that majority of errors pointed to the CLAT officials after the release of question paper has been ignored. “We had pointed errors in about 30 questions, but CLAT officials have ignored most of the errors,” said a CLAT coaching expert.

Experts and candidates are also demanding re-testing of CLAT 2015.

With the new revelation, experts and students have blamed RMLNLU officials for their “casual approach towards CLAT exam process”. The CLAT 2015 officials, however, said that collecting questions from open knowledge sources is not wrong and it should not be related to the performance of students in CLAT 2015 paper.

“There is nothing wrong in collecting the questions from different sources. Also, this is no way related to the performance of CLAT takers,” Dr J. D. Gangwar, CLAT 2015 Convener told Careers360.  He also set aside any possibility of re-testing of CLAT.

Dr. Gangwar added that the question paper had been set by subject experts entrusted by CLAT Committee and the issue of copying of questions will be discussed internally by the CLAT Committee.

How many people fill CLAT exam per year

The actual number of applicants for the Common Law Admission Test differ every year and is usually experiencing a 8-10 % increase every year. Although the official records have many caveats attached to it but previous three year participants statistics is as follows:-

So, approximately 55000 to 60000 students apply for the Clat examination every year. This number is the sum of total applicants for UG courses and the PG course. So, if you want to know about the UG course, approximately 50,000 people fill the exam every year and this year too you can expect the same trend.

However, it has to be said that many of those applicants fill the exam just to have an experience of a competitive examination after class 12 and hence if you are serious enough and have prepared well for the exam then your real competition is with probably 15000- 20000 people. Now, that is not any small number to compete against but given the stature of the examination, you will have to face such competition in order to fetch a seat in the top NLUs.

Can you please tell the best colleges of CLAT in maharashtra.