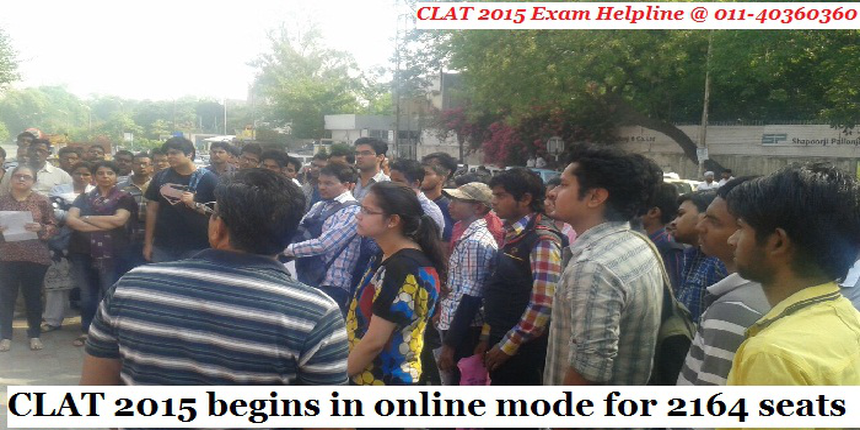 CLAT 2015 – the most sought after law entrance exam will be conducted by Ram Manohar Lohia National Law University (RMLNLU) on May 10 in the online mode for admissions to undergraduate law programmes including BA LLB in as many as 2164 seats distributed among 16 National Law Universities (NLUs). As per CLAT 2015 Convener, Dr. J.D.Gangwar, a total of 39,686 applicants have registered for Online CLAT 2015.

Careers360 is reporting live from CLAT 2015 Exam Centres. Scroll below to check live updates on CLAT 2015 from various exam centres.

As CLAT 2015 was scheduled to begin at 3:00 pm in various cities across India, candidates were asked to report at their respective exam centres 30 minutes before the commencement of exam but were seen reaching their exam centres by 2:00 pm.

4:45 pm –Parents started gathering around the exit gates as the concluding time of exam was nearby

2:00 pm – Candidates were seen flocking in different exam centres in large numbers as only an hour more was left for the most sought after law entrance exam

1:45 pm – CLAT 2015 aspirants appearing for the exam from remote centres expressed their problems in reaching the centres as they were far away from the capital and even from the nearest metro station

“I am appearing for CLAT 2015 for the first time. I am a little nervous for the entrance as it’s in online mode and my anxiety increased as I feared that if I would not be able to reach my exam centre on time. The nearest metro station from here (an exam centre in Noida) is 15 kms awayâ¦”, said Divya.

1:35 pm – At remote exam centres in Delhi-NCR (Noida and Greater Noida), candidates were seen reporting at their exam centres