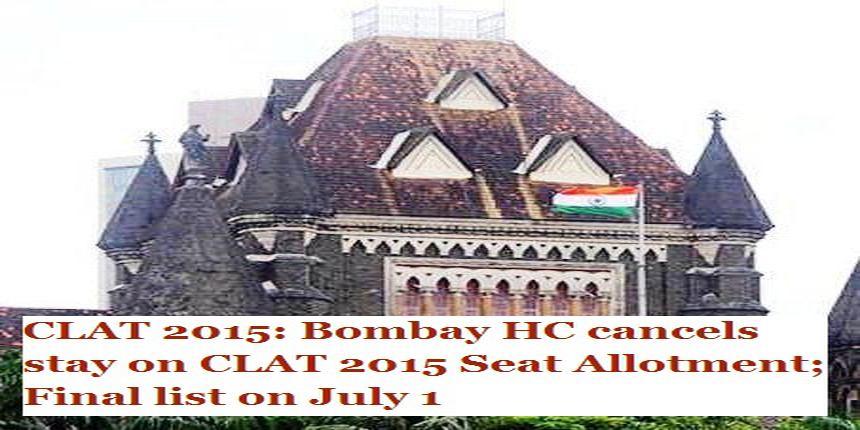 The Bombay High Court has cancelled its earlier stay on CLAT 2015 fourth and final allotment list. Further, as per the latest improvements in the HC case, Dr. Ram Manohar Lohiya National Law University (RMLNLU), the organizing NLU of CLAT, can now publish the fourth and the final allotment list on July 1 as scheduled earlier.

The petitioner had also approached Kerala HC on June 15, raising objections against as many as seven erroneous questions in online CLAT 2015 paper. Mr. Kelvic Setalwad, the counsel representing CLAT 2015 Convener submitted that the matter had come for the very first time and CLAT 2015 Committee would like to file a short affidavit referring the allegations and objections against the seven questions.

Mr. Setalwad  argued that “According to Dr. J. D. Gangwar, CLAT 2015 Convener the expert body appointed by CLAT 2015 Committee had already taken a decision noting the objections raised by the petitioner and proceeded further to publish the revised first, second and third allocation list on June 9, June 15 and June 21, respectively. The petitioner too along with the concerned candidates had proceeded further and paid the requisite payment after the allotment list.”

“CLAT 2015 Committee and the Convener would like to take appropriate steps to club all the matters pending in various High Courts including Allahabad, rajsathan and Kerala apart from the the Bombay HC petition, as the issue is with regard to CLAT 2015,” added Mr. Kelvic Setalwad.

CLAT 2015 Convener, Dr. Gangwar will be filing an affidavit against the seven erroneous questions as alleged by the petitioner on June 25, 2015, the CLAT counsel assured the Bombay HC.

CLAT revised Result was announced on June 6 for over 39772 candidates who had appeared for the national level law entrance exam conducted by Dr. Ram Manohar Lohiya National Law University (RMLNLU). CLAT 2015 is the basis for admission to 2190 seats of BA LLB across 16 NLUs in India.