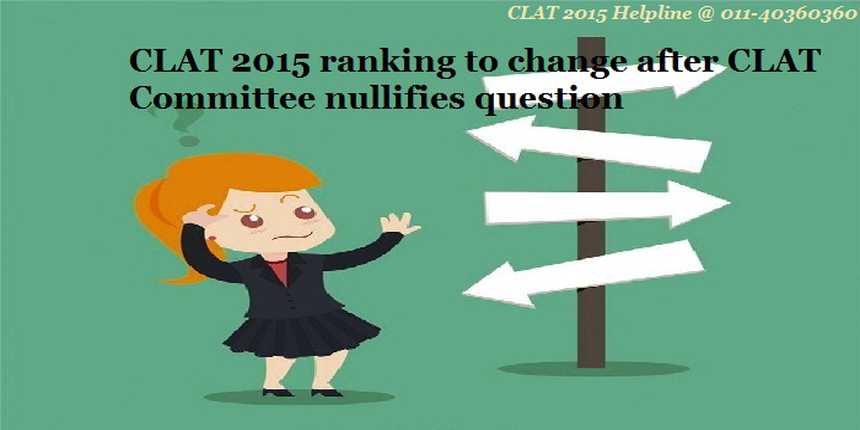 CLAT 2015 ranking order for ongoing counselling will be changed as CLAT Committee has decided to cancel one more question due to typo errors in the same. Subsequently, those candidates who had marked it correctly as per official answer key stand to lose one mark and those who had marked it incorrectly will get 0.25 extra marks that were deducted as a penalty for marking incorrect answer.

An expert CLAT Committee constituted after the allegation on CLAT 2015 exam and evaluation process found one question erroneous and decided to do away with the same under marking scheme.

CLAT 2015 Committee headed by Dr. Ram Manohar Lohiya National Law University (RMLNLU) on Friday, June 5 admitted the typo error.  Dr. J.D. Gangwar, CLAT 2015 Convener said, “We admit that one of the 200 questions in online CLAT 2015 paper had a typo error and now the question has been nullified. Therefore, the test-takers will be marked for a total of 199 questions including the one bonus marked questions.”

Earlier on May 23, Careers360 had reported one bonus marks to all CLAT takers for a wrong question admitted by CLAT Committee.

The nullification of a particular question after the declaration of results is likely to change the ranking of test-takers.

How the CLAT 2015 ranking will change after nullification of the question?

As the committee has taken the decision to nullify a question carrying a typo error, the ranking order is bound to change for majority of test takers, where candidates who had attempted the question correctly as per official answer key stand will be loosing one mark and those who had marked it wrong will be awarded 0.25 extra marks that were deducted as a penalty for the incorrect reponse.

May 23 – CLAT 2015 Convener denies the allegations against transparency in CLAT 2015; sends CLAT 2015 OMR response sheets and answer key to every individual test-taker on their registered mail clarifying the marking scheme

May 22 – CLAT 2015 Committee and RMLNLU clarifies that one question had a typo error; test-takers awarded one bonus marks

April 2 – Allahabad High Court order CLAT 2015 Committee to scrap upper age limit of 20 years, after a writ was petitioned in the Honourable court against the same