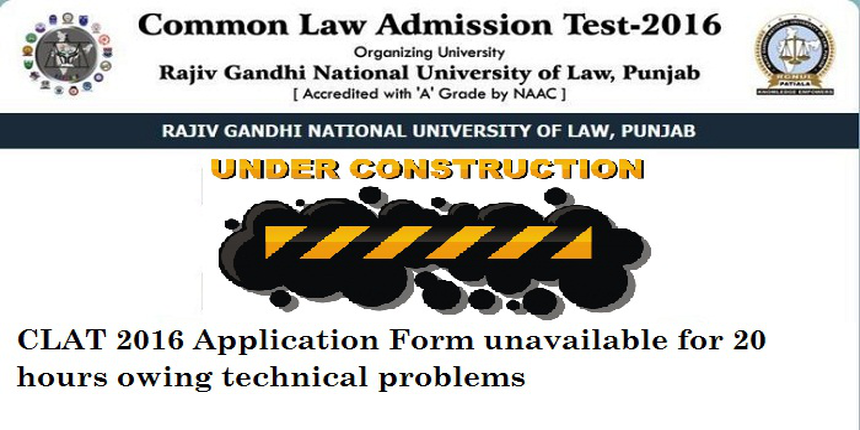 Merely a day after opening CLAT application form, CLAT officials said that CLAT 2016 Application Forms will remain unavailable for about 20 hours between January 3 and 4 owing technical problems. Moreover, CLAT aspirants will not be able to apply or even login during this duration for CLAT Applications 2016. The applications had started on January 1.

“There is some technical reasons for which the online application form link of Common Law Admission Test (CLAT) 2016 will be remain inaccessible from 3rd January 2016, 4:00 PM to 4th January 2016, 12:00 Noon,” said the CLAT Committee.

Careers360 brings you a screen shot (below) of the official notification reading the same.

Aspirants need to remit an application fee of Rs. 4000 through offline (ICICI Bank Challan) or online mode. The payments in the online mode are acceptable through Credit Card/Debit Card/Net Banking.

RGNUL Patiala is conducting CLAT 2016 on May 8 for admissions to undergraduate and post graduate law programmes in as many as 17 National Law Universities (NLUs) and admit card will be available from April 15, 2016. Check here other important dates of CLAT 2016.

CLAT Committee has recently added more seats in both undergraduate and post graduate law programmes, as the law entrance shall be conducted for as many as 2252 BA LLB seats and 632 LLM seats.

Common Law Admission Test (CLAT) is the most sought after national level law entrance exam conducted every year for shortlisting candidates for as many as 2252 seats distributed among the 17 participating NLUs. Last year as many as 39686 candidates had registered for CLAT out of which 37358 candidates appeared for the admission test.