CLAT 2016 to be conducted by RGNUL Patiala on May 8; Applications to begin from Jan 1 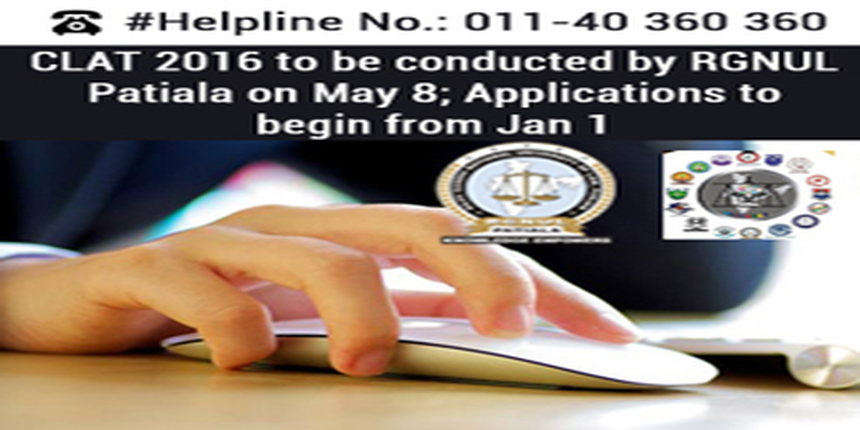 Common Law Admission Test (CLAT) 2016 has been announced by Rajiv Gandhi National University of Law (RGNUL) Patiala on December 14, 2015. CLAT 2016, the coveted law entrance exam for admissions to 2252 seats in five-year integrated law programmes will be conducted on May 8, 2016 as the applications will begin from January 1, 2016.

Careers360 in an interview with CLAT 2016 Convener, Dr. G.I.S Sandhu had earlier informed that CLAT 2016 Notification will be announced on December 15, 2015. RGNUL Patiala has also declared CLAT 2016 Important Dates besides the eligibility criteria for the law entrance exam. Click here to download CLAT 2016 Official Notification.

As per the CLAT 2016 Eligibility Criteria, one needs to have passed 12th Board Examination of 10+2 educational pattern or equivalent from a recognised Educational Board, securing at least 45% marks in aggregate of the qualifying subjects. The age limit has been removed as per the apex court’s order of last year. CLAT officials have said that the ‘No Age Bar’ policy will help in increasing registrations. CLAT Convener, Dr. G.I.S. Sandhu said, “Since there is no age bar in CLAT 2016, we hope for an increased number of registrations this year and as per the number of applicants we will be increasing the exam centres as well.”

The Application Form of CLAT 2016 shall be filled in online mode and candidates need to register before applying. A Login Id and Password will be needed for the application form which can be received from the e-mail account provided during online registration of CLAT 2016. You also need to remit an application fee of Rs. 4000 in any of the modes – online and offline using Credit Card/Debit Card/Net Banking/Bank Challan options.

The most sought after law entrance exam will be conducted by RGNUL Patiala in online mode where aspirants will need to answer as many as 200 questions for maximum marks of 200. Each correct answer shall be awarded 1 mark whereas every incorrect response will result in deduction of 0.25 marks each from the total scored marks following negative marking policy.

The NLU will be declaring results in the last week of May, 2016 where a merit list will also be issued along with the response codes and official answer key of CLAT 2016. Based on the merit list, candidates will be able to attend the online counselling which includes seat allotment and document verification process.

Last year, CLAT was marred by a number of allegations involving erroneous questions and faulty merit lists. RGNUL Patiala with an objective of transparency in the exam process has made the necessary arrangements. Dr. G.I.S. Sandhu says, “We will be making all necessary arrangements for a fair conduct of Online CLAT 2016.”

CLAT is the law entrance exam conducted by an NLU every year for admissions to both undergraduate and post graduate law programmes including BA LLB, BBA LLB, B.Sc LLB and LLM. Last year as many as 39686 candidates had registered for the Common Law Admission Test where 37358 candidates took the test.

Stay tuned to law.careers360.com for more news and features on CLAT 2016