CLAT 2016 to be conducted by RGNUL Patiala; writ petition pending in SC 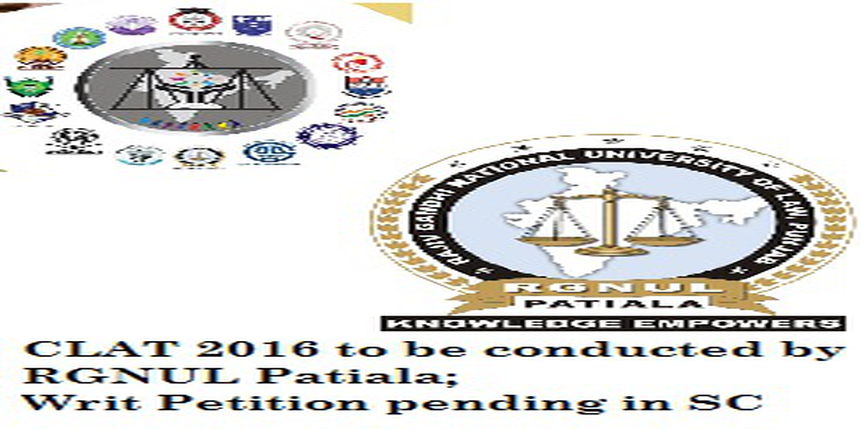 CLAT 2016 shall be conducted by Rajiv Gandhi National University of Law Patiala (RGNUL Patiala). The NLU has officially notified the same while a Writ Petition demanding constitution of a permanent body of CLAT is still pending in the Supreme Court of India. RGNUL Patiala has officially announced that it shall be conducting CLAT 2016 for admissions to undergraduate as well as post graduate law programmes including BA LLB, LLM and Ph.D.

Find the official announcement on the window below –

The announcement came in between while a writ petition filed by Dr. Shamnad Basheer, is still pending in the Supreme Court of India. The next hearing for this petition is January 4, 2016.

Earlier, Dr. Shamnad Basheer had filed a Writ Petition in the Supreme Court demanding formation of a permanent CLAT conducting body. He says, “The petition seeks intervention of the apex court against arbitrary, unreasonable, inconsistent, opaque, negligent, sub-standard and inefficient implementation of the Common Law Admission Test (CLAT) held by National Law Universities (NLUs) constituting CLAT Committee, every year by rotation in the order of their establishment and not a permanent body.”

Last year, CLAT was conducted by Dr. Ram Manohar Lohia National Law University (RMLNLU) and had been drawn to a number of controversies including erroneous questions. The law aspirants filed a number of cases in different courts regarding the erroneous questions but the CLAT Committee barring a few questions, didn’t pay heed to the law aspirants’ appeal. Despite the pending court cases, RMLNLU conducted the counselling process and after completing the admission formalities, on July 7 closed the central admission process of CLAT 2015.

Different exam experts had commented that the ‘non-friendly action’ of CLAT Committee and RMLNLU, had outraged the law aspirants and it had led to demand of a permanent CLAT body.

Common Law Admission Test (CLAT) is the national level law entrance exam conducted every year for shortlisting candidates for as many as 2190 seats distributed among the 16 participating NLUs. Last year as many as 39686 candidates had registered for CLAT out of which 37358 candidates appeared for the admission test.