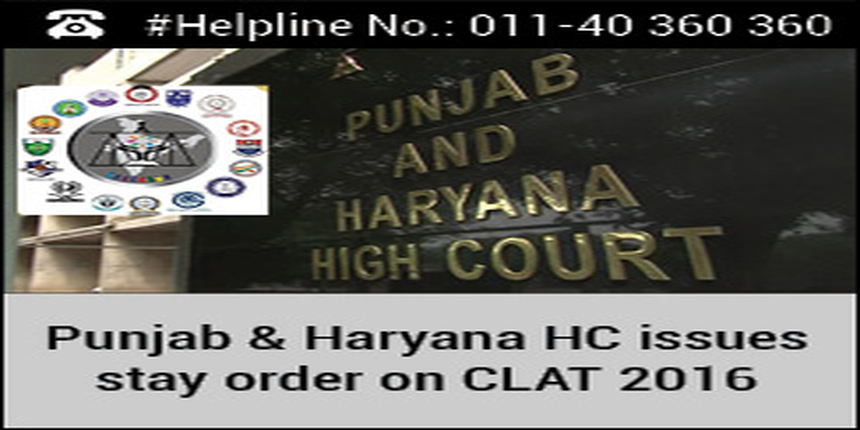 Common Law Admission Test (CLAT) 2016 has been dragged into a fresh controversy as yet another Public Interest Litigation (PIL) has been filed against the exam committee and Bar Council of India (BCI) demanding conduct of the law entrance exam in the offline mode along with online.

The PIL, filed in the High Court of Punjab and Haryana, also demanded a stay on the conduct of the examination, which is scheduled for May 8, 2016 following which the high court has issued a stay order pending further hearings. The next court hearing is on March 2, 2016.

The PIL was filed on February 8, 2016 by advocate Hemen Aggarwal who pointed out that the court’s order will bring justice to aspirants who live in rural areas where internet connectivity might be slow and aspirants are not properly trained to appear for online examinations. Talking to Careers360, Hemen Aggarwal said, “An online exam is injustice to those who come from rural households as several of them lack the basic know-how of operating the computer machines and, therefore, face difficulties in appearing for an online paper.”

Clarifying further, he said that it will be quite good if the exam is conducted in both online as well as offline mode. “Let it be a decision for the aspirants appearing in CLAT for the mode as it will be fair and transparent,” said the petitioner besides pointing out that an added advantage of the offline paper is that it allows test takers to skip questions- a facility yet unavailable in the online mide.

CLAT 2016 was earlier dragged to the Supreme Court on August 28, 2015 on a PIL filed by Shamnad Basheer, an ex-WBNUJS faculty and currently IPR Expert demanding formation of a permanent conducting body of CLAT. The current status of this case is still pending as the next hearing is scheduled for March 4, 2016.

Is a permanent CLAT body the need of the hour?