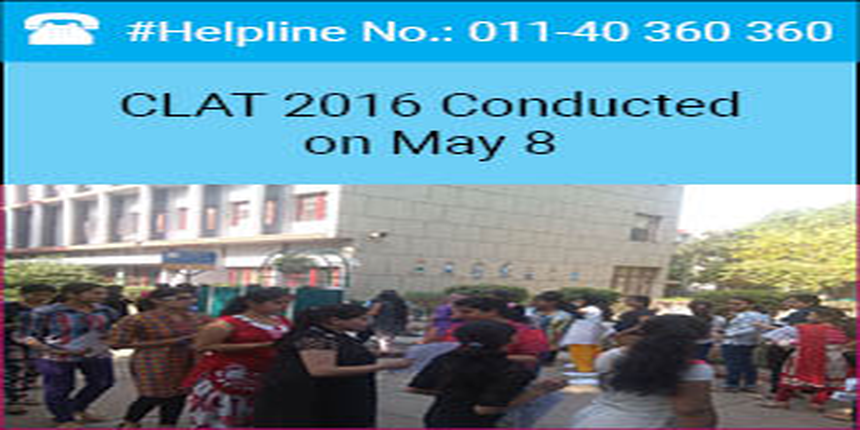 Common Law Admission Test (CLAT) 2016 was conducted in online mode on May 8, 2016. Rajiv Gandhi National University of Law (RGNUL), Patiala conducted CLAT 2016 at 66 test centres of India. Careers360 covered the coveted law entrance exam from the test centres and brings latest updates on CLAT 2016 live. Amidst the scorching heat, CLAT 2016 test-takers have reached the exam centre as early as 12:00 noon, while the reporting was scheduled at 3:00 pm. CLAT 2016 was reported as the easiest CLAT till date with Mathematics section quite tricky, however the sections like English, Legal Aptitude and General Knowledge made the day of the test-takers.

5:05 PM: CLAT test-takers found the exam to be an easy one with English and Legal Aptitude to be the easiest. However, Mathematics questions were tricky, yet doable. General Knowledge questions had a quite a number of questions from Current Affairs and a few from Static GK.

5 PM: CLAT 2016 ends, with candidates coming out of the test centres.

2.45 PM: Entry closes as per the scheduled time. Few late comers are still seen to be coming and requesting to be allowed entry, who are allowed by the centre authorities.

2.30 PM: Majority of the candidates have gone insde the test venue as hardly half an hour is left for the CLAT 2016 exam to start.

1 PM: Some candidates queue up for the entry process, others wait aside, either going through last minute revision or arranging the necessary documents like ID Card and Admit Card.

CLAT is the covetetd law entrance exam for admissions to 2252 seats on offer at 17 NLUs in India.