As Common Law Admission Test (CLAT) committee released question paper and answer sheets of CLAT 2016 on May 12, CLAT takers alleged that the paper had multiple discrepancies. After the question paper was made public on May 12, candidates also claimed that one of the questions was out of prescribed syllabus.

CLAT 2016 test-takers have alleged that around five answer responses are wrong in the official answer sheet released by CLAT authorities. Besides this, the CLAT 2016 question paper carried a visual reasoning question which was restricted area for CLAT question paper, according to the official announcements earlier. 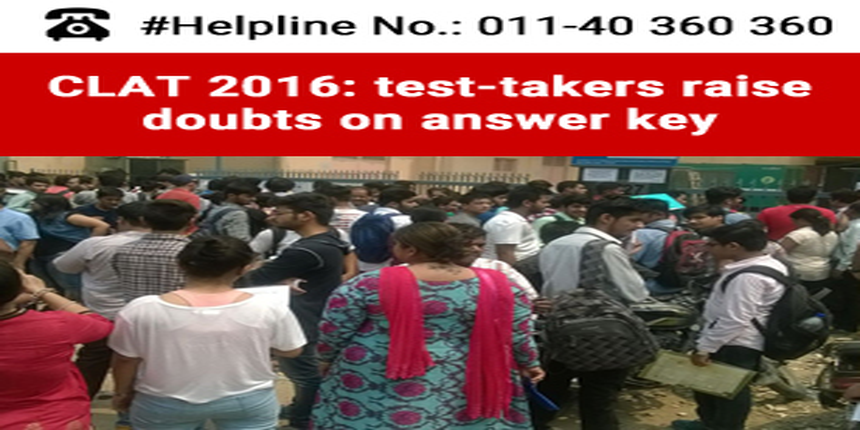 In its website, the CLAT Committee had clearly mentioned that “However, visual reasoning will not be tested.” But still question id– 2185952598 in Reasoning Section had Visual Reasoning question.

Find below was the official website reads on test paper pattern–

But the below question in CLAT 2016 paper had Visual Reasoning–

In conversation with Careers360, Arghya Samadhar, one of the CLAT 2016 test-taker said, “I had not prepared for visual reasoning question. But the same in the question paper surprised me and I could not solve that.” The Visual-Reasoning question carried 1 mark.

The test-takers of the coveted law entrance examination have also raised their doubts related to CLAT 2016 question paper and answer key on different social media platforms. Careers360 brings you details on the alleged erroneous official answer-sheet of CLAT 2016.

Careers360 brings you a table of wrong answer options / questions as alleged by the test-takers.

*Tentative change in scores of CLAT 2016

Careers360 has contacted CLAT 2016 Committee and RGNUL Patiala seeking responses to this.

The CLAT conducting body, Rajiv Gandhi National University of Law (RGNUL) Patiala has offered 3-days’ time for candidates to raise objections regarding any erroneous questions or response sheets of CLAT 2016 paper. The representations may be sent at the earliest by May 15, 2016, after which the CLAT committee will be releasing the amended answer key on May 23, 2016. The result of CLAT 2016 is scheduled to be announced on May 23 along with the publication of category-wise CLAT 2016 merit list.

Stay tuned to law.careers360.com for more updates and features on CLAT