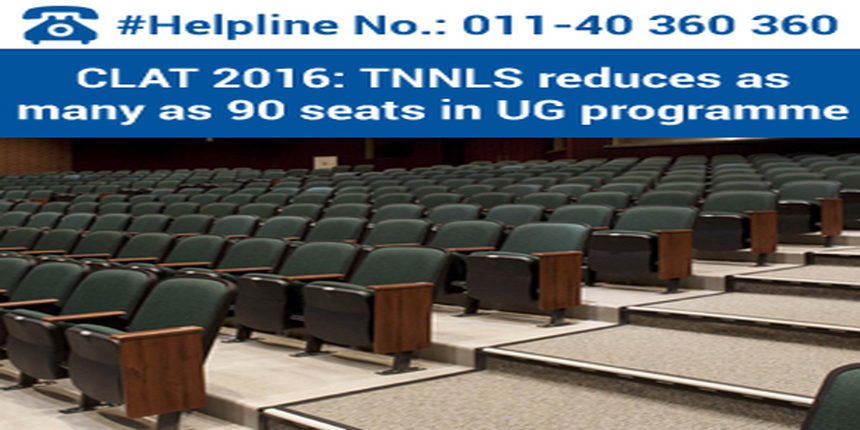 Tamil Nadu National Law School (TNNLS), Tiruchirappalli has reduced as many as 90 seats in its undergraduate law programmes including BA LLB and B.Com LLB. After curtailing such a large number of seats in TNNLS, CLAT 2016 will now be conducted for a total of 2252 UG seats.

The CLAT Committee has issued a corrigendum reflecting the revised number of seats in the CLAT 2016 Brochure. “TNNLS has decided to reduce the seats in UG course for the admission year 2016 through CLAT. Accordingly, the seat distribution chart relating to TNNLS will beread with modification reflected,” said the CLAT Committee.

Careers360 brings you the official notification reading the same.

Tamil Nadu National Law School (TNNLS), Tiruchirappalli has revised the seat distribution in under graduate programmes and offered 55 seats each in BA LLB and BBA LLB programmes for the academic year 2016. Earlier, the NLU had offered a total of 200 seats inclusive of both programmes. Check below the revised number of seats in each category–

As many as 38 seats have been reduced in All India Category, 38 seats for the State category and a total of 14 seats in the Special Category including foreign candidates.

Rajiv Gandhi National University of Law Patiala (RGNUL Patiala) will be conducting CLAT 2016 on May 8 and the application forms have begun from January 1. The last date for submission of applications is March 31, 2016. Check here other important dates of CLAT 2016.

Common Law Admission Test (CLAT) is the most sought after national level law entrance exam conducted every year for shortlisting candidates for as many as 2252 seats distributed among the 17 participating NLUs. Last year as many as 39686 candidates had registered for CLAT out of which 37358 candidates appeared for the admission test.