The Common Law Admission Test (CLAT), has been conducted by CLAT committee, on May 14, 2017. The coveted law admission test was conducted at various centres across 63 exam cities as listed by the committee. CLAT 2017 was conducted in an online mode for two hours duration beginning at 3:00 pm. Over 50,000 candidates out of 50,676 applicants have appeared in CLAT 2017 for admissions to BA LLB/BBA LLB, B.Com LLB, B.Sc LLB and LLM programmes offered at 18 National Law Universities and various law colleges of India. The candidates appearing for CLAT 2017 visited their allotted examination centre of CLAT 2017 at least one and a half hour before the exam timings. Careers360 brings here ’Live Coverage and Updates’ from CLAT 2017 test centres. 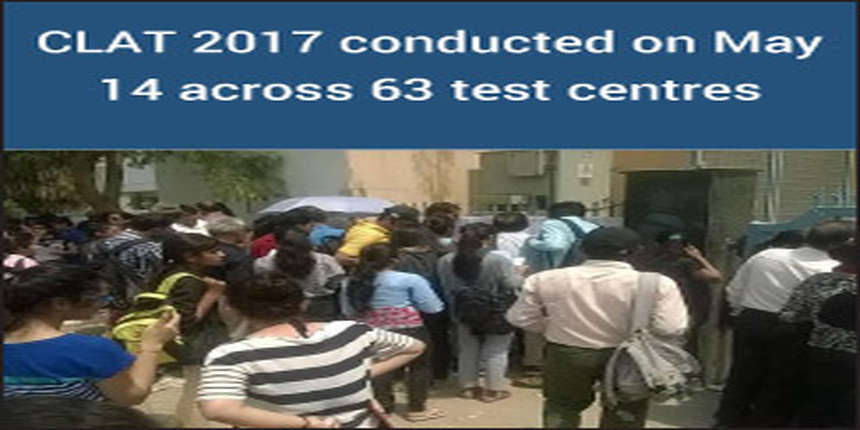 The application numbers for CLAT 2017 shows an increase of 13 per cent, even as there was no extension in last date as compared to last year’s application dates. In an interview with Careers360, CLAT convener Dr. A Lakshminath shared various factors for CLAT 2017 application rise. Read here the complete interview of CLAT Convener.

CLAT 2017 was conducted from 3:00 pm to 5:00 pm in online mode. The test carried 200 multiple choice questions for one mark each. There was to be negative marking of one-fourth i.e. 0.25 marks in case of incorrect attempts. CNLU Patna, the conducting authority for this year will be releasing CLAT answer key 2017 by May 16.

Scroll down to check CLAT 2017 Live Coverage for test centres -

3:00 pm– No more candidates allowed in the examination hall as CLAT 2017 begins in various test centres across 63 cities.

2:55 pm– Last call for candidates, as gates of the test centre are about to be closed.

1:35 pm– Candidates queue up at the gate for verification of admit card and security check. Candidates are not allowed to carry water bottles, watches and any other material inside the examination hall.

1:30 pm– The officials at the test centre put instructions and roll number wise seating arrangement details on the board. Candidates check their hall and note it down.

1:15 pm– Candidates start reporting at their allotted test centre as per the guidelines of CLAT conducting body mentioned on admit card of CLAT 2017

Stay tuned to law.careers360.com for more news and updates on CLAT 2017

All the law courses aspirants can check here the Top colleges other than NLUs accepting CLAT scor...

can I have online free classes for preparation of clat?

Shwetha,
CLAT syllabus has been changed and the to give you a gist of the changed syllabus,
The no.of questions asked will be reduced from 200 to 150 but the time duration will be the same
English: There will be no more direct vocabulary questions
GK: Static GK will be removed and only your knowledge on current affairs will be tested
Mathematics: Only DI based questions.
Logical Reasoning: More emphasis on critical reasoning questions
Legal Aptitude: No Legal GK questions but the reasoning questions will remain.
While we cannot authenticate any online videos, we have a list of books that you can prepare from:
https://law.careers360.com/articles/best-books-for-clat/amp#aoh=15863529362542&referrer=https%3A%2F%2Fwww.google.com&amp_tf=From%20%251%24s
Read More
Answer
Answer Later
Report
15 Views

Here are few tips for preparation you must follow to get a good score without coaching:-English: Vocabulary questions will be asked. Word Power Made Easyis the book you can use to improve your vocabulary.

Hello,
.
Go through the below link for getting previous years question papers with answer sheets. You will even find sample papers for practice purpose.
https://law.careers360.com/download/clat-sample-papers-previous-years
Read More
Answer
Answer Later
Report
13 Views

Mam Sir parnam. I DEEPAK.I prepare clat exam. But I think any time .When I complete clat exam .What is the syllabus clat. Please explain me.

CLAT is an entrance exam for admission into 23 National Law Universities and some of the Private Law Colleges.

Click at this link to know more about CLAT - https://law.careers360.com/exams/clat

Hope this was helpful.

Hello,
Common Law Admission Test is conducted every year for admission to LLB course in NLUs throughout the country.
The question paper will be based on the English language, Quantitative Techniques, Current Affairs including General Knowledge, Legal Reasoning and Logical Reasoning.
General Knowledge here includes important events in contemporary world. So, history is not asked in CLAT paper. Only important events of recent past are included.