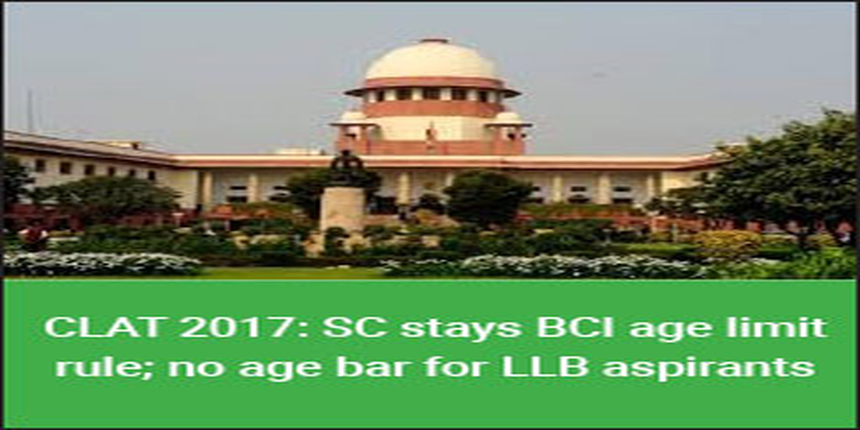 The Supreme Court has issued an interim stay order against the Bar Council of India’s attempt to introduce an upper age limit for LLB admissions to state law colleges and Universities, while making it clear that no age limits can apply to aspirants seeking to study law in the country. The verdict comes after months of protracted legal battles between the BCI and numerous petitioners across India rendered ineligible for major law examinations such as CLAT due to the age cap.

Speaking to Careers360, Advocate Sushmita Mukherji stated that the news has made her and all other petitioners “extremely happy”. In February, Advocate Mukherji had won a case on behalf of 70 petitioners challenging the upper age limit in the Allahabad High Court. However, the High Court bench had also clarified that with the matter pending in the Supreme Court, the order would only stand subject to the latter’s final decision. With the apex court finally passing its verdict, the Allahabad High Court’s verdict on removing the age bar also stands. “We were looking forward to this for a long time. The age limit revocation brings justice to every aspiring law student,” Advocate Mukherji said.

Earlier on March 1, the Bar Council of India had held its annual general body meeting in Kolkata and passed a resolution which increased the upper age limit for law aspirants from 20 to 22 years for Five Year Integrated law programmes and from 30 years to 45 years for Three Year LLB programmes. This had been done on the basis of a recommendation made by the Supreme Court in the previous hearing held on February 28, wherein it had directed the BCI to “take a good decision...take such a decision so that no one should come to court.”

However, even the BCI’s attempt to increase the age limit was not welcomed by law aspirants, with many asking for LLB age limits to be removed altogether. As per reports, the Supreme Court’s two member Bench comprising Justice SA Bobde and Justice L Nageswara Rao concurred with this view in the final hearing, remarking to the BCI, “On one hand you promote legal education, and on the other, you prescribe age limits”. The stay order also means that the three petitioners who had originally filed the petition in the Supreme Court, engineering student Rishabh Duggal, commerce student Rishabh Arora and the orphaned Increasing Diversity by Increasing Access (IDIA) scholar Michael Sam, are now eligible to appear for CLAT 2017 and other law exams in the coming year.

Responding to the SC verdict, Dr. A. Laxminath, the Vice Chancellor of Chanakya National Law University and the CLAT 2017 Convener, said, “We will be happy to abide by the Supreme Court’s order. As soon as we receive the official order document, the age criteria for CLAT 2017 will be deleted from the prospectus”.

The Supreme Court clarified that this is an interim order and will stay the age limit notification issued by the BCI in September 2016. The case will be heard out in full in July 2017 before a final verdict is passed. Aspirants who were disbarred from attempting any LLB exam of their choice due to the age limit rule are unlikely to care for this technicality and will be relieved that the final verdict has gone in their favor after years of confusing verdicts passed by various High Courts. Apart from upholding the Allahabad High Court’s order, the SC verdict will now also apply to orders passed in favor of the petitioners at the Rajasthan and Bombay High Courts in the past two months.

The LLB age limit criteria was first introduced by the BCI in 2008 and has followed a controversial trajectory ever since. The rule had already been challenged and revoked as per the orders passed by the Punjab and Haryana High Court, Bombay High Court and the Rajasthan High Court. However, the BCI had been required to reintroduce it after the Madurai Bench of the Madras High Court ruled in 2015 that the BCI would be violating the Advocate’s Act, 1961 by withdrawing the age limit. This order was later upheld by the Supreme Court in the same year, leading to the BCI issuing its September 2016 notification and kicking off another legal battle. The SC verdict issued today brings this chapter to a close for now.

Go to www.law.careers360.com for the latest news on CLAT and other LLB exams!