CLAT 2018: Official notification out; No age bar mentioned for May 13 online paper

CLAT 2018 Notification - CLAT 2018 will be held on May 13 as per an official notification of Common Law Admission Test released by The National University of Advanced Legal Studies (NUALS) Kochi on December 20, 2017. To the relief of many law aspirants, there is no mention of age bar in the CLAT 2018 official notification for appearing in the NUALS Kochi administered NLU admission test. 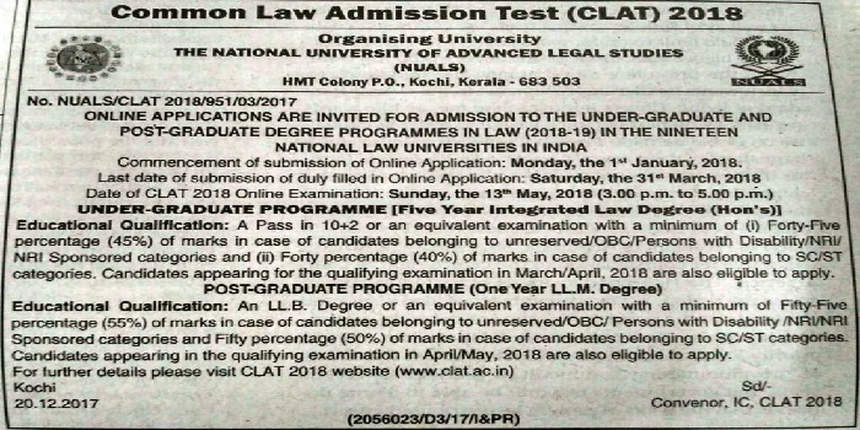 Careers360 had first reported about CLAT 2018 on November 19, 2017, over a month before the official announcement was finally released. The CLAT 2018 Convenor had given an exclusive interview to Careers360 on NUALS Kochi conducting the Common Law Admission Test this year.

Surprisingly, despite the release of the official notification, the CLAT 2018 official website is not yet active and is displaying a 'temporarily down' message when last accessed on the morning of December 21.

CLAT 2018 aspirants can view here the official notification as advertised in leading newspapers across India.

Further, the law aspirants can also check the 'temporarily down' message seen on the CLAT official website on December 20, 2017, even after the publication of the CLAT notification 2018.

As per the official announcement by NUALS Kochi through the CLAT 2018 advertisement and in the information conveyed to Careers360 earlier, the exam will be held online on May 13, 2018. The candidates will be able to fill CLAT application form 2018 from January 1 and submit the duly filled-in application after paying the CLAT application fees till March 31, 2018. The CLAT applicants can download CLAT 2018 admit card on April 20 and the results of Common Law Admission Test will be announced on May 31, 2018.

Why CLAT 2018 notification does not mention age criteria?

Last year, the Bar Council of India (BCI) had introduced an age bar policy on law admissions. As per the BCI age bar policy, candidates above 20 years of age were not eligible for CLAT. However, after a Supreme Court stay order on BCI’s age bar, CNLU Patna, the CLAT 2017 administering NLU, allowed all the law aspirants to appear for CLAT irrespective of their age. Thus, abiding by the apex court’s order, NUALS Kochi has not mentioned any age criteria this year too.

The Common Law Admission Test is being conducted for the tenth year in a row, with NUALS Kochi administering the online paper for admissions to undergraduate and postgraduate seats in a total of 19 NLUs including Maharashtra National Law University, Aurangabad. Hence, with the addition of one more NLU, the seats available for admissions have increased and a significantly higher number of law aspirants are expected to appear for the national-level law exam this year.