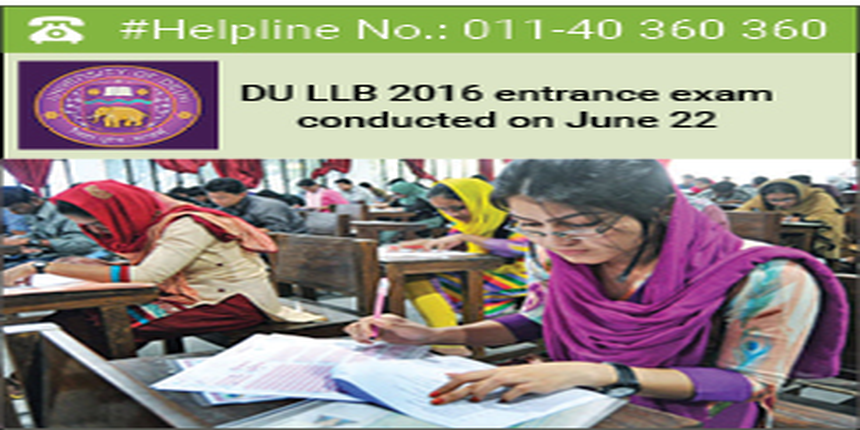 DU LLB 2016 entrance examination was concluded on June 22 (2:00 pm) at various test centres in as many as six cities including Delhi for admissions to undergraduate law seats in three law centres of the university. The law entrance exam was conducted in offline mode by the University of Delhi. As per the official sources, around 25000 applicants have appeared for the LLB entrance exam of Delhi University.

The test takers told Careers360 that the DU LLB 2016 exam paper was overall moderate with tough questions in Legal Aptitude section. However, the questions from English and Comprehension section made the day. Shanti Kapoor, one of the DU LLB test taker said, "I am happy after taking the LLB entrance exam. It was an easy one with easiest questions from English, Maths and Reasoning sections. The Legal Apti questions were tough and covered majorly legal jargons and important court cases."

"The General Knowledge questions had various questions from Constitution of India and related to Indian judiciary system," shared Pooja Jadhav, an LLB aspirant who appeared for the exam from Nagpur.

As per exam pattern of DU LLB 2016, test takers had to answer a total of 175 questions of objective nature with multiple option choices in the allotted time duration of 2 hours. Candidates had to respond a question with only one answer option. In case any question had been marked with more than one answer option, it would be regarded wrongly attempted.

The test takers would be able to check their preliminary answer key of DU LLB 2016 exam on June 23 and the final one on June 30, 2016. The results of DU LLB 2016 exam is expected to be announced in the last week of June which will also determine cutoff marks of DU 2016 LLB exam, following which the counselling will be held on the month of July for admissions to undergraduate law seats in the university.

University of Delhi offers admissions to as many as 2611 LLB seats in its Faculty of Law through DU LLB entrance examination.