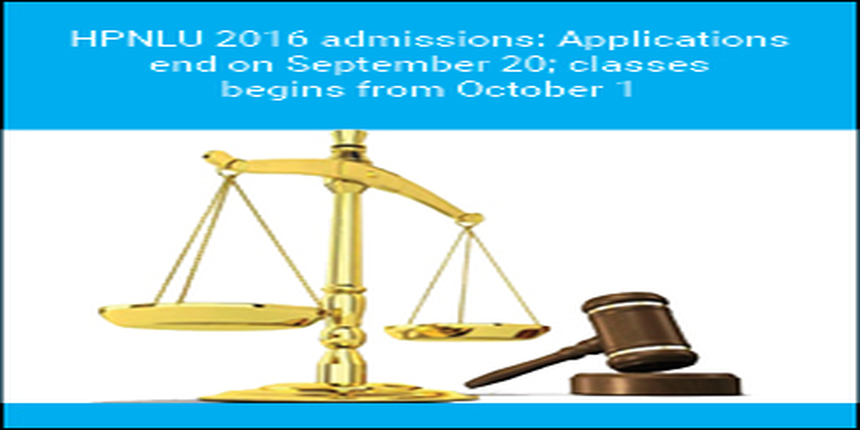 Himachal Pradesh National Law University (HPNLU) Shimla is the newest addition to the elite club of National Law Universities (NLUs). HPNLU has invited applications for admissions to 60 seats in five-year integrated undergraduate law programme for the academic year 2016. Candidates who are interested in pursuing BA LLB course from the NLU of Himachal Pradesh need to fill the application forms of HPNLU 2016 after checking the eligibility criteria and submit the applications to the official address of HPNLU by September 20, 2016.

The admissions to the BA LLB seats in HPNLU will be offered on the basis of merit (score) as secured in any of the entrance examinations- CLAT/AILET/LSAT-India/SNAP. The NLU of Himachal Pradesh is scheduled to begin its academic classes from October 1, 2016.

Interestingly, the HPNLU admission notification has been announced through the High Court of Himachal Pradesh as the NLU is yet to design its own online site. The candidates need to fill the HPNLU 2016 applications offline and send it at the official postal address mentioned below in this page.

HPNLU 2016 application form – How to fill

Candidates who have difficulty in posting it by post can also submit the application in hand at the above mentioned address or can even e-mail it to ja-hp@nic.in after scanning the filled-in HPNLU 2016 application form.

HPNLU 2016 Application Form – Download the application form for HPNLU 2016 admissions and fill in in your own handwriting.

As per the official notification of HPNLU 2016 admissions, Virender Sharma is the officiating registrar of the NLU. Earlier in this month, Chief Justice of India (CJI) TS Thakur had laid the foundation stone of the NLU.

Stay tuned to law.careers360.com for more news and feature updates on HPNLU