HNLU Raipur Cutoff 2020 - The NLU Consortium will release the cutoff of HNLU Raipur 2020 at the time of counselling, which will be held after declaration of CLAT 2020 result. HNLU Raipur 2020 cut off would be released for each of the three rounds of counselling for both the 5-year BA LLB and one-year LLM programs. The combined seat intake for the integrated program is 180, while the LLM program has an intake capacity of 45 seats. Such CLAT applicants who meet the cutoff criteria in their respective categories and for the program applied for admission would be considered for admission; alternately, if a candidate misses the cutoff, he/she will likely not get admission. HNLU Raipur cut off 2020 would be determined based on variables like number of applicants and their performance in CLAT 2020, and also intake capacity. 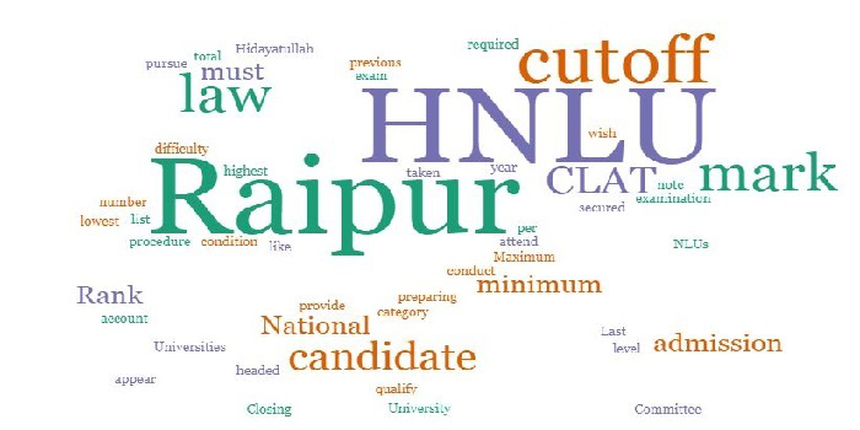 CLAT 2020 will be conducted in pen-and-paper mode on May 10. The consortium has made some key changes to the CLAT 2020 exam pattern, including bringing down the number of MCQs to 150 from 200 for the UG paper. In case of CLAT PG 2020, cutoff marks have been introduced to the objective paper; now subjective papers will be evaluated only if the candidate qualified in the objective paper.

CLAT 2020 application form is now open and can be filled till March 31.

Factors that will determine HNLU Raipur cut off 2020

Considering the above parameters are variables, the cutoff for HNLU Raipur 2020 may change with change in any of these parameters.

Applicants along with checking the HNLU Raipur 2020 cut off, must also check CLAT 2020 cutoff for other participating institutes as well.

Question: Will the HNLU Raipur cutoff 2020 released for all the counselling rounds?

CLAT 2020 counselling will have three rounds, and NLU Consortium will release HNLU Raipur cutoff separately for all three rounds.

Question: What happens if I meet the CLAT cutoff for HNLU Raipur in my reserved category, but not in open category?

In that case, the candidate will be eligible for admission is the category they belong to.

Question: What is the seat intake for 5-year integrated LLB program in HNLU Raipur?

The total seat intake for BA LLB program is 180, while LLM program has 45 seats.

Question: What are various factors on which HNLU Raipur CLAT 2020 cutoff depends?

which are the best book for CLAT preparation?

List of best books for CLAT are listed below subject wise

General Knowledge 2020 and 2019 by Arihant Publications

A Modern Approach to Logical Reasoning by RS Aggarwal

Word Power Made Easy by Norman

For detailed information go through

English consists of the following topics-

Mathematics consists of the following topics-

*Questions based on hypothetical situations

For more information follow the following link given below

English consists of the following topics-

Mathematics consists of the following topics-

*Questions based on hypothetical situations

For more information follow the following link given below

Is anyone from Bhopal, cleare CLAT, and gets NLIU, Bhopal, and not willing to stay in his own home instead of the hostels! I want to know if NLIU will allow this or not? Hoping to hear from you soon!

Hey,
Every hostel has distinct policy and prerequisites for allowing accommodation. Most of the times, preference is given to outstation students or the ones with good scores. However, it is always advisable to speak with the hostel authorities regarding the details and eligibility.
Hope this helps.
Good luck.
Read More
Answer

does CLAT exam has any kind of passing marks. if yes then how much

Hello student in entrance examination like clat there's no passing marks it has cut off which vary from college to college I request you to please help me with your preferable college so that I can check and provide you the exact cut off details. This year its difficult to predict cut off as clat has recently changed its examination pattern and total marks has been reduced to 150 from 200. Cut off vary every year on various factors like the level of question in the entrance examination and total number of applicants in that examination.