LSAT does not test prior legal knowledge: Daniel O. Bernstine 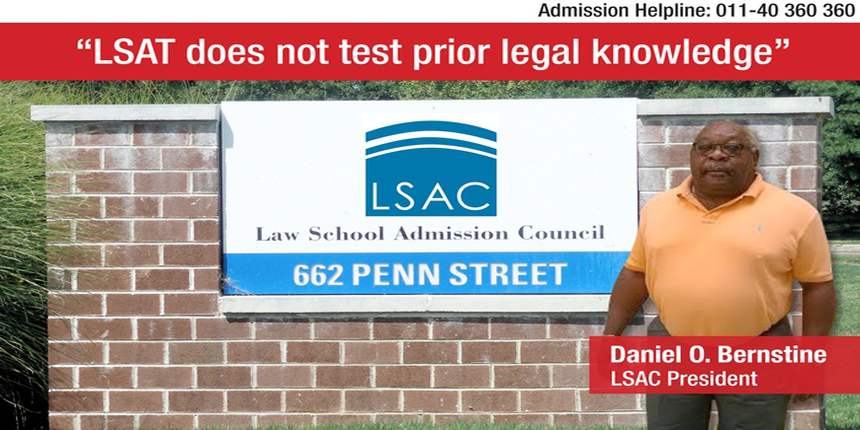 LSAT-India was introduced in 2009 and currently, after a span of 6 years more than 60 colleges are participating in the exam. In a chat with Careers360, LSAC President Daniel O. Bernstine talks about the LSAT-India framework and the exam's two way benefit for students as well as colleges accepting LSAT-India scores and what makes LSAT-India different from other law entrance exams.

The LSAC President also shares his view on the growing acceptance of LSAT-India scores across Indian Law Institutions and the reasons for the same.

Careers360: What was the number of applicants last year? How has been trend in last 2-3 years?
Daniel O. Bernstine: In 2014, 4000 candidates have registered for the Law School Admission Test. The growth in numbers has been significant. While we started with 750 LSAT-India 2010 Applications, it has grown almost five times.

Careers360: NLUs conduct CLAT in India. How LSAT-India is different from CLAT or AILET?
Daniel O. Bernstine: There is just one similarity between LSAT-India and CLAT and AILET. The similarity is all of these are the law exams for admissions to the five-year integrated law programmes in the law schools/institutions of India. Besides this single similarity what I visualize is only the differences. LSAT-India exam is designed differently from other law entrances in India as it has a neutral background.

Careers360: What do you mean by neutral background?
Daniel O. Bernstine: LSAT-India is the law entrance exam which has holistic exam content, which means the exam tests logical and analytical abilities as well as reading comprehension, which LSAC assumes to be the essential skills and qualities needed to become a successful lawyer. Unlike any other law entrance exams, LSAT does not test prior legal knowledge, mathematical knowledge, grammar or current affairs.

Careers360: Why do you think testing of current affairs, prior legal knowledge, mathematical knowledge is not required?
Daniel O. Bernstine: As we say ‘Neutral background’, a candidate from a Political Science must be having good logical skills, analytical skills, reading comprehension skills but in the same time he might lack mathematical knowledge. Same is the case with a science candidate; he would be having good mathematical skills but lag in current affairs portion. How can we expect a law aspirant who is yet to pursue legal education need to have prior legal knowledge?

Careers360: As you know GMAC has acquired NMAT and entered the big Indian education market. Are there any similar plans of yours?
Daniel O. Bernstine: No, we don’t have any such plans in the near future.

Careers360: What advantages Indian law institutions have while associating with LSAC?
Daniel O. Bernstine: There are distinct advantages for colleges associating with LSAC and accepting LSAT-India scores. LSAC (LSAT-India) provides a database of candidates appearing in LSAT-India to the associated law schools. They also receive the LSAT-India result and merit/rank list. Overall, this entire database of candidates costs nothing to the law schools. Indeed, the law schools/ institutions need not invest anything for all these. In addition to this, the colleges do not need to analyze the critical reasoning, analytical reasoning and reading skills of candidates, independently. Moreover, the associated colleges are receiving recognition beyond their region as candidates all over India are appearing for LSAT-India.

Careers360: How do you see Indian legal education in comparison to that of global standards?
Daniel O. Bernstine: I visualize the Indian legal education at equal stature that of global standards. In India, we have more qualified and talented law professors educating the law aspirants. In India, the five-year integrated law programmes are emerging as an advantage for those aspirants who want to pursue a career in law soon after their high schooling.
We have so many good law colleges too. I feel happy to share that many of these good law schools are part of LSAT-India Associated Colleges.

Careers360: How do you visualize the career prospect of a law graduate in India?
Daniel O. Bernstine: Sad to say, but there is an acute shortage of qualified lawyers. Yet India has one of the highest litigation rates among its population. This demand and supply issue means the talented lawyers will never have to worry about their income. There are a plethora of opportunities for a law graduate who can practice either practice as an advocate in a court of law, with a stipend ranging between Rs. 5000 and Rs. 40000 or a corporate lawyer where they can expect an attractive monthly salary between Rs. 20000 and Rs. 50000.
They can further proceed for a career in government services as Solicitor General, Public Prosecutor or even a Judge.

Stay tuned to law.careers360.com for more news and feature articles on LSAT-India