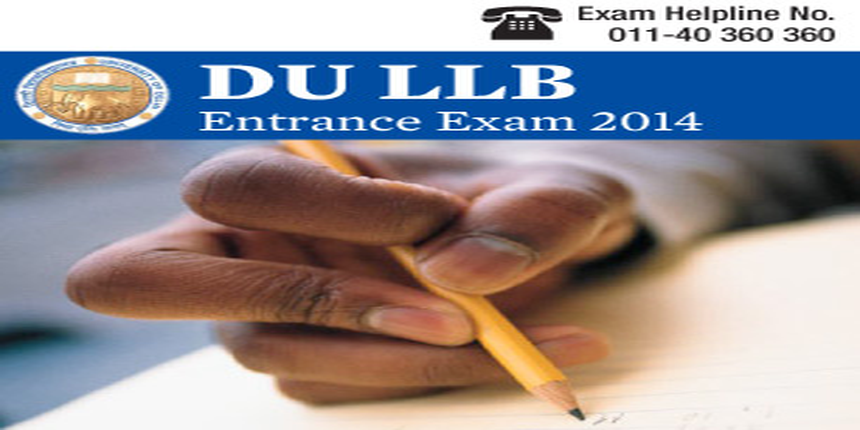 DU LLB Entrance Exam 2015 Exam Pattern – University of Delhi conducted DU LLB Entrance Exam 2015 on the scheduled date. The LLB Entrance Test 2015 was held at various centers located in Delhi. The LLB Entrance Test comprised of one paper comprising 175 Multiple-Choice Questions with four options to each question. The questions covered various sections including English Language Comprehension, Analytical Abilities, Legal Awareness and Aptitude and General Knowledge. DU LLB Entrance Test shall be conducted in English language only. For every correct response, the examinee were awarded four marks and for each incorrect response, one mark was deducted from the total scored marks. No marks was deducted for any question which shall be left unanswered.

As per the official, The candidates who have passed 10+2 exam or obtained Graduation/Post-graduation from Open University system directly without any basic qualification, Only that candidates will not be eligible to apply for BHU LLB programme.

No DU does not offer LL.B 5 year integrated course, rather it offers 3 year Law programme. There are other universities which offer LL.B integrated 5 year course , the list is as follows-

I hope it helps

You need to pass your graduate exam from University of Delhi or an equivalent University for DU LLB. General Category Students should score at least 50% marks in the qualifying exam and OBC,SC,ST students should score atleast 40%. The exam dates are between 2nd and 9th July. If you are in your 5th semester now, you still have to wait because you have still more than 6 months to complete the course. You should be able to complete the course atleast by the time of admission. But in your case, you will not be able to complete your B.Com and so you cannot write DU LLB this session.

Hi im really confused about the dates that are from june 2-9. For how many days will the exam go on? or it can be any date between june 2nd to 9th?

Hii Gul!
You need not be confused about the dates of the DU LLB examination. You will be notified when the time comes. You will also get the proper details in your admit card. For now, the dates are decided as 2 June to 9 June. Your exam may fall on one of the days or may be divided into several days. You will eventually come to know. You can refer the following link for more details-
https://www.google.com/amp/s/law.careers360.com/articles/du-llb/amp
Hope this helps.
Good luck!
Read More
Answer
Answer Later
Report
3 Views

sir , this year my graduation is appearing from mjpru. And also i m qualified 12th from ALLAHBAD board. So how should i prepare for DU LLB EXAM to get good marks plz give me rgt suggestion.

In English language section, there will be questions from grammar, unseen passage,  antonyms-synonyms, fill in the blanks etc. The best way to prepare is to refer any comprehensive grammar book and read any one english newspaper daily.

Reading newspapers regularly will extremely help you to be aware of the current affairs. For general knowledge section, you can refer to these books- Manorama Year book, India Year Book etc.

If possible you should make a proper study plan and do accordingly. There are many mock tests booklets available in the market, choose any one of them and start solving the mock papers. Solving previous year papers will help you to get accustomed.