The CLAT 2021 results were declared on July 29. Over 53,000 candidates fought for around 2622 seats in CLAT UG. Only a few hard-working candidates were able to clear the exam with a high rank. Mayank Kumar is one such candidate, who is from a humble background and have secured AIR 97 in CLAT 2021. With his hard work and dedication, Mayank has secured a seat for himself in NALSAR Hyderabad’s 5-year LLB programme. But, what factors contributed to his success? Careers360 had a detailed discussion with Mayank to know about the secrets of his success. He gave some elaborate answers to our questions. Read the complete interview below. 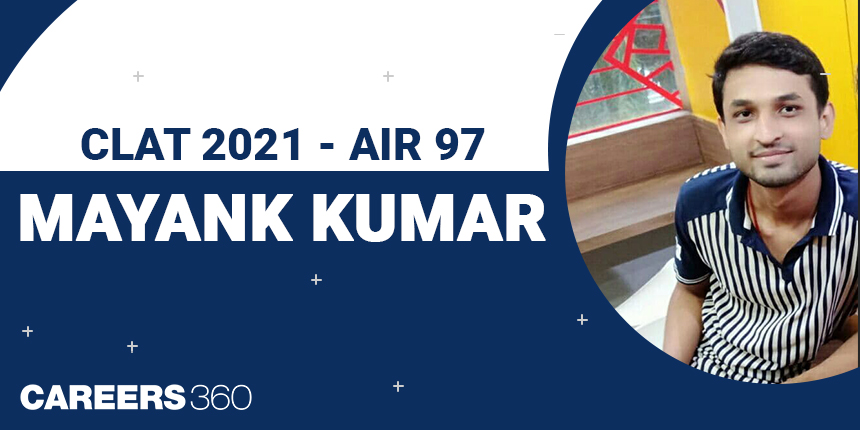 Careers360 - Congratulations on your performance in CLAT 2021. What was your initial reaction upon knowing your rank?

Ans - Thank you so much. Actually, I was not surprised. I was expected my CLAT result in the top 100.

Careers360 - Tell us something about yourself - the board you studied under, the name of the school, the place you belong to, and a bit about your family.

Ans - My name is Mayank Kumar and I am from a small village Ushraha, in Bihar. I completed my higher secondary (Class 10) from New Holy Ganges Public School, Khagaria and intermediate from +2 SR High School, Khagaria.

Careers360 - What are your rank, overall and sectional scores in CLAT 2021?

Carees360 - Were you expecting the results, or was it a surprise?

Ans - No, it was not surprising for me. I was as per my expectations.

Ans - I started preparing in the month of September. I prepared from my home, in online mode. But my preparation got affected due to some health issues. Somehow, I managed to continue my preparation and completed all the necessary

Careers360 - Did you follow any specific routine and study hours?

Ans - Yes, I had compartmentalized my study plan. For the first three to four months, I focussed on clearing concepts and worked on weak areas intensively. Then, in the next phase, I revised the topics I covered in the half phase with a mild practice session. In the third phase, I focussed on revision and practising the mock tests.

Careers360 - What are the subject-wise books you used for CLAT exam preparation? Any specific reason for selecting these books?

Ans - Last month was the most crucial phase. At this stage, you should have a clear understanding of what to do and what to avoid. You should have faith in your year-long preparation.

I also practised a lot of mocks to understand my usual mistakes. So, I will advise CLAT aspirants to practice as much as they can without getting demotivated.

Careers360 - Did you solve sample papers and take mock tests? What is the correct frequency for these exercises?

Ans - Yes, I solved the previous year paper of CLAT and official sample papers multiple times. Solving the sample papers gave me an idea about the examiner’s mindset and what skills they want to test in CLAT. Solving sample papers is the best way to understand CLAT.

In addition to solving sample papers, I practised around 80 mock tests on the CLAT pattern. One should solve at least 50 mocks in CLAT starting from the month of December. The frequency of solving mocks in a week should be increased in the last two months.

Careers360 - Many students make a mess of their preparation in the law for a few days, as exam pressure reaches the pinnacle. How to handle this tricky phase?

Ans - Yes, I agree with this, even I also did the same. I got panicked in the last 20 days and started thinking negatively. This affected my performance in mock tests negatively and I started getting low scores.

To handle this, I took a break of two days and analysed my performance. I found myself in a good position and gained some positivity. This helped me going through those last few days.

Careers360 - How can one improve accuracy and speed?

Ans - There should be a particular order of attempting the test. I would suggest the candidates try attempting the mocks with multiple approaches and strategies and find the best way suitable for them.

In my case, I started the test by solving English sections followed by logical, general knowledge, legal aptitude and quantitative techniques.

Careers360 - Which law discipline do you want to study in your undergraduate?

Careers360 - Also, do you have any NLU preferences?

Ans - Yes, I opted for NLSIU Bangalore as my first preference. I have been allotted a seat in NALSAR Hyderabad. I am also looking for NLU Delhi through AILET.

Careers360 - Having secured NALSAR Hyderabad, many students would now look up to you. Do you have any messages for these future law aspirants?

Ans - Yes, I did some mistakes, so out of that, some tips I would like to share with law aspirants.