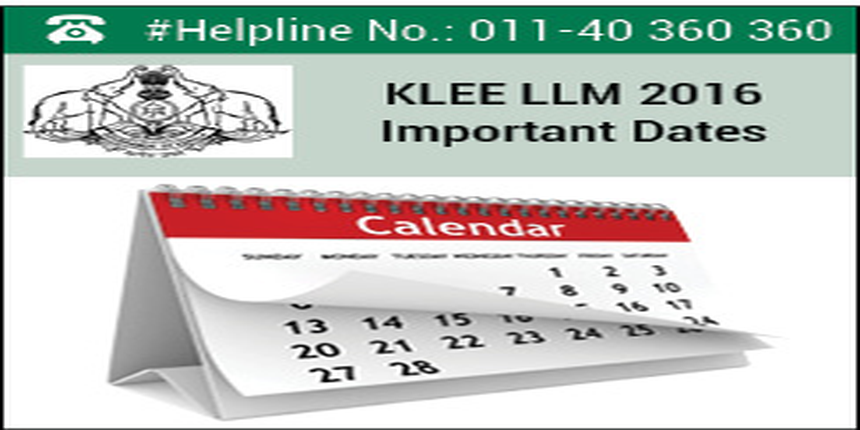 KLEE LLM 2016 Important Dates – Commissioner of Entrance Exam (CEE), Thiruvananthapuram has released notification on January 10, 2017 for admissions to LLM programmes offered in 9 government and self-financing law colleges in Kerala. The application form of KLE LLM 2016 is available from January 11, 2017 in online mode. Candidates can check here important events for KLEE LLM 2016 including application, admit card, exam as well as the answer key, results, and counselling schedule mentioned below in this page.

KLEE LLM 2016 is to be conducted on February 5, 2017 in offline mode in two shifts. The application form of KLEE 2016 can be filed before the last date of submitting application i.e. January 18, 2017. Scroll down to know more about scheduled events of KLEE LLM 2016 –

KLEE LLM 2016 offers as many as 136 LLM seats in 4 Government and 5 Self-financing law colleges of Kerala. Candidates seeking admissions to post graduate law programme must apply for KLEE LLM 2016.

KLEE LLM 2016 Results – The candidates will be shortlisted on the basis of results of KLEE LLM 2016 which will be announced last week of February.

Stay tuned to law.careers360.com  for more news and articles on KLEE LLM 2016

KLEE Cut off 2020 - CEE, Thiruvananthapuram will release the KLEE 2020 cut off, tentatively in th...

The KLEE examination is managed by the Commissioner of Entrance Examinations (CEE). Not all the law colleges in Kerala offer admission on the basis of KLEE score. Here is the list of colleges that accepts KLEE score-
http://law.careers360.com/colleges/list-of-law-colleges-in-kerala-accepting- klee
Some of the law colleges (eg. NLU) accept the CLAT scorecard for admission intolaw course . Some universities (eg. Mahatma Gandhi University, CUSAT) also take their own entrance examination for admission to law courses.
Read More
Answer
Answer Later
Report
5 Views

Hii Renjana!
KLEE is conducted by CEE and provides admissions to students in various law colleges. This includes private as well as government colleges. You will get the name of the Colleges  accepting KLEE in Kerala in the link provided below -
https://law.careers360.com/colleges/list-of-law-colleges-in-kerala-accepting-klee
Hope this helps.
Good luck!

No. There are only 3 well recognised private colleges which accept KLEE for offering law courses. The colleges are:

There are many well recognised colleges which offer direct admissions for Law degree without any entrance exam. Some of the best colleges are:

KLEE is a computer based exam conducted by CEE, kerala to admit students in law colleges. Not all the private colleges accept students based on the KLEE score, only few colleges consider this score. Private colleges will offer you a seat based on your 12th marks and other criteria also.

May I know , in what all integrated programs can I get admission if Iget pass in KLEE ?

KLEE entrance test is conducted by the state of Kerala for admission to 3 year LLB which is after graduation and 5 year integrated LLB course, based on the rank you will get in this exam you can get admission in integrated law course, which will be BA.LLB i.e Bachelor of Arts LLB, for more information regarding the exam please check the link attached herein, https://law.careers360.com/exams/klee

Your KLEE brochure has been successfully mailed to your registered email id .