Top law exams other than CLAT

Top law exams other than CLAT - Almost everyone aspiring for a career in law, just after their higher secondary schooling would be aware of Common Law Admission Test (CLAT). The most coveted law entrance examination for admissions to 2o National Law Universities (NLUs), CLAT offers as many as 2400 seats and the admission test scores are widely accepted by a number of other law schools in India. But do you know there are a number of law entrance examinations other than CLAT, which can help you landing in a good law school. So here comes the question, what are the top law exams other than CLAT? 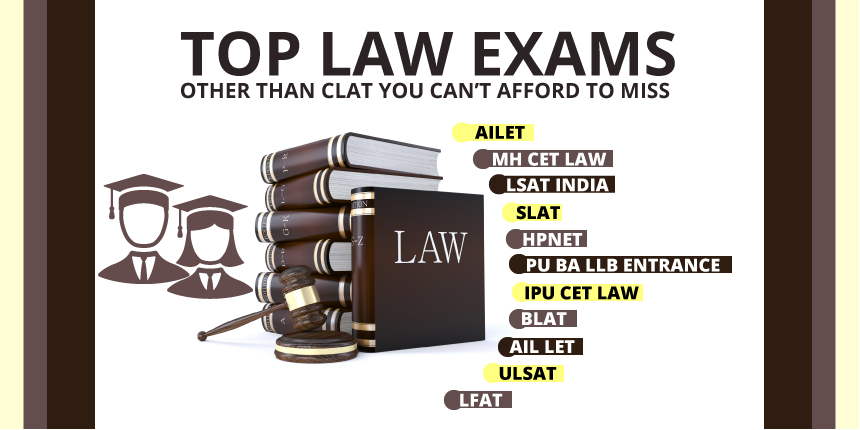 Careers360 brings you a list of UG law exams in India which are equally important as the Common Law Admission Test. The information on undergraduate law entrance exams in India will help aspirants like you in getting a fair idea of entering the law career-path in non-CLAT ways.

Before we move onto the details of the law entrance tests held in India, let us get a tabular representation of the various undergraduate law entrance exams.

List of Law Exams in India other than CLAT

Why to check law entrance exams other than CLAT?

This is the most important question one should consider while someone advises for appearing in law exams other than CLAT. Foremostly, appearing in more than one entrance exam also helps you in increasing your chances of getting an undergraduate law programme seat in various other good law schools including the other two NLUs located in Delhi and Shimla.

Besides, you also get to have a hand-on experience of different law entrance exams before you actually appear for CLAT 2019, which again may help in boosting up the confidence. Another but obvious reason to appear for various other law exams but CLAT is the increasing competition amongst the CLAT takers is huge as compared to the other national or state-level or the university level law admission tests.

The prime objective of appearing in a law entrance exam is pursuing five-year integrated law programmes. What if it’s not through an NLU! The Tier 1 law schools are at par the National Law Universities and receive as many applications of the law aspirants as the individual NLUs. Therefore the candidates are advised to appear for the law exams other than CLAT.

Many of the law aspirants often fear questions related to Quantitative Aptitude and Mathematics. The sections are however an important section of majority of law entrance examinations including CLAT. The weightage of Mathematics (Numerical Ability/Quantitative Aptitude) section range between 5 percent and 15 percent in a majority of the law entrance tests thus making it a mandatory section to attempt, even if with a Maths-phobia. So is there any law entrance which doesn’t test the candidates on ability to solve Mathematics questions?

The good news is there is one undergraduate law entrance exam which doesn’t test the knowledge of Maths. The Law School Admission Test for Indian law schools commonly known as LSAT India is the only law admission test which evaluate a law aspirant on the basis of his/her reasoning and writing skills.

AILET - National Law University Delhi conducts All India Law Entrance Test for admissions to as many as 83 BA LLB seats. AILET 2019 will be held on May 5 where the test takers will need to attempt as many as 150 questions of one mark each. According to the AILET exam pattern, each question responded incorrectly will lead to deduction of 0.25 marks from the total score.

HPNLET - Himachal Pradesh National Law University conducts HPNET for admissions to as many as 60 BA LLB and BBA LLB seats on offer in the university. HPNET 2019, an offline paper carrying 150 questions of one mark each will be held in the month of May. There will be no negative marking in the HPNLU administered law admission test, as per the HPNET 2019 exam pattern.

MH CET 5-year LLB - Directorate of Higher Education, Pune will conduct Maharashtra Common Law Entrance Test for admissions to as many as 10060 seats on offer into the five-year integrated law programmes across 153 state law colleges. According to the MH CET Law 2019 exam pattern, the candidates will have to answer a total of 150 questions of one mark each and there will be no negative marking for any incorrect response.

IPU CET Law - Guru Gobind Singh Indraprastha University conducts IPUCET for admissions to as many as 1985 LLB seats on offer across the eight participating institutes of the university. Following the IPUCET LLB exam pattern, candidates will have to attempt the offline IPUCET law paper in a time-duration of 150 minutes. There will be as many as 150 objective-type questions carrying four marks each in the IPUCET LLB paper. Candidates responding a question wrongly will lead to deduction of 1 mark from the total score, following the negative marking policy in IPU CET LLB.

SLAT - Symbiosis International University conducts Symbiosis Law Admission Test, erstwhile Symbiosis Entrance Test for law programmes (SET Law) is the university-level entrance for admissions to as many as 840 undergraduate law seats distributed among the three law schools including SLS Pune, SLS Noida and SLS Hyderabad. The SLAT 2019 paper will be an offline paper carrying 150 questions of one mark each. As per the SLAT 2019 exam pattern, candidates will not be penalised for the questions responded wrong.

If you have any query regarding Top Law Exams in India, feel free to write us via QnA.