Is Indian legal education at par with global standards? 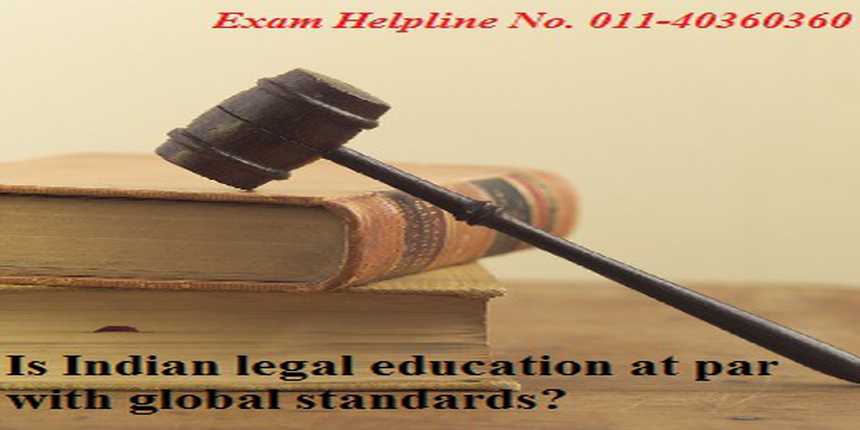 Top shot legal luminaries give their opinion on the status of legal education in India and show the way forward. Here are some insights from former Supreme Court Justice, Dr. Arijit Pasayat and Prof A K Koul, Former VC, NLU Jodhpur & NUSRL, Ranchi.

As the world turns a global village with computer and Internet playing a major role and foreign investments, mergers and acquisitions, insurances etc. become the order of the day. Every day new technologies are coming up to help the mankind and on the other hand new problems at individual as well as social levels are coming-up for the people. Novel methods of frauds and crimes including cyber crimes are coming to light on an everyday basis.

These developments require enactment of new laws and rules in various fields, including intellectual property rights, information technology, investments, banking, taxation, arbitration, environment, consumer protection. Thus there is huge demand for experts in law drafting as well as lawyers and judges for these fields. Legal education in India is today facing numerous challenges to meet these needs and also to keep pace with the latest developments.

In India the Bar Council of India (BCI) in 1967 introduced three-year Law Course (LLB) and five-year Law course in 1982. In the five-year integrated Law course, a student is admitted to the course at the end of twelve years of schooling.

The legal education system in the West has been mostly successful ion running programmes that increase the proficiency of practicing lawyers with continuous evaluation of syllabus being taught and a deeper involvement of the industry in designing the pedagogy and curriculum. But this has been lacking in the Indian context.

Justice S.P. Mehrotra in his article, Re-Inventing Legal Education: Challenges & Opportunities writes that the students, who pass 10+2 in Science subjects, face difficulty in coping with the vast syllabus of Arts subjects prescribed in the Pre-Law Course. Lack of proper staff and guidance in various institutions coupled with the time-limitation of semesters make the task cumbersome for the students.

Dr. Arijit Pasayat, former Justice Supreme Court of India and Chairman Academic Council Indian Law Institute (ILI) rubbishes the idea of comparing law institutes in India with their foreign counterparts, saying, “If you talk of global standards, there is no set standard globally; it depends upon the capabilities of our students. The students have to bring you their standards, our standards are different and let us not start comparing our standards with others and say that we are lagging behind. The Bar Council should check the institutions admitting students just to earn money. Then only can we do better.”

BCI has listed 21 compulsory papers (30 under 2008 rules) about 85 optional subjects. But the syllabus is not framed by BCI, it is done by the universities and this accounts for the various different syllabuses for the same subject throughout India. Prof A K Koul, Former Vice Chancellor, NLU Jodhpur & NUSRL, Ranchi says, “You have to change the whole texture, simply opening these National Law Universities have not brought substantial improvement. The situation is typically odd, in the sense that we had conceptualized to develop these national law universities to be centres of higher learning, higher merit, but they have been now reduced to ordinary colleges, etc. There are various reasons for that and one of the most important reasons is that we do not have good quality teachers who could make these universities frontrunners in the world.”

The other problem with NLUs as stated by Prof Koul is that the input of research in Indian context is virtually zero; the little amount of research that is done is too philosophical. The third problem is that nobody touches Indian law in the universities, the judgments of the Supreme Court, High Courts, executive, legislature and the way legal system functions in India. In India the professors are only concerned about their salary and deliver lecture, nothing substantial takes place, he said.

There is also need to segregate students who seriously desire to take up legal practice and others who are interested in liberal education in Law. The lack of initiatives in this direction has been largely responsible for dilution of standards in professional legal education.

Are lawyers coming out unskilled?

Many of the senior advocates have been complaining that law professionals coming out of mediocre colleges are unskilled and bringing bad name to the profession and there is urgent need to check these institutions.  Ravinder Yadav, a Supreme Court advocate said, “Those who are coming out of good institutions are intelligent and good students, well-versed in law.”

Talking about the right skill sets needed for an advocate, Yadav said that the students have skills but they lack in procedural aspects like CrPC, CPC, Evidence Act, which are necessary for becoming good lawyers, so without knowledge of procedural aspects they are a bit handicapped.

A ray of hope

The past decade has seen various developments in legal education with change in curriculum, integrated degrees in law, establishment of the National Law Universities and private players coming up with good schools.

A major development has been the introduction of Common Law Admission Test (CLAT) in 2008, which brought the statutory National Law Schools together and also improved the quality of students entering these institutions. The All India bar Examination mooted by the BCI in 2010 as a qualifying examination for lawyers to practice in courts has also increased the quality of candidates entering this profession.

Law schools have entered into a number of Memoranda of Understanding with their foreign counterparts for students and teachers’ exchange and research. There has also been substantial improvement in infrastructural development, with access to numerous legal databases.

It is seen that legal education in India is focused on preparing future lawyers while there are a huge opportunity for students in the field of corporate sector, judiciary, teaching, NGOs, etc. which has been ignored somewhat.

Prof Koul says, “There is no academic leadership as far as legal education in India is concerned. If you look at the way syllabus is being talked and taught at National Law Universities in India, it is worst than a Law college. If you do not control the mushrooming of Law colleges in India the situation is going to get worse.”

Future of legal education in India

The Law schools of the future ought to provide academic space for engaging in teaching and cutting edge research on issues of global significance. The institutions ought to constantly reinvent themselves for facing the challenges of globalization through exchange and collaboration programmes. This has different implications for faculty, students, and for the development of teaching and research programmes.

Law schools clearly have a duty to ensure that all their students receive a legal education, which will prepare them to cope effectively with the challenges of legal practice in the 21st century. The Law schools must try to promote international and comparative law courses; as it is highly important for students to acquire international understanding, experience and knowledge of foreign laws and legal systems to not only deal with cases related to MNCs and other international treaties but as it also opens space to look at opportunities abroad.

Stay tuned to law.careers360.com for more news and features on legal education