Kashish Makkar has cracked CLAT 2016 with an All India Rank (AIR) 4. Kashish, who is already pursuing his 5-year BA LLB from RGNUL Patiala, now wishes to join his dream law college -NLU Bangalore.  In this interview with Careers360, the 18-year old Rajasthan boy who aspires to be a corporate lawyer attributes his success to his consistent preparation of General Knowledge and Current Affairs sections despite attending to the first year classes in his current law school. 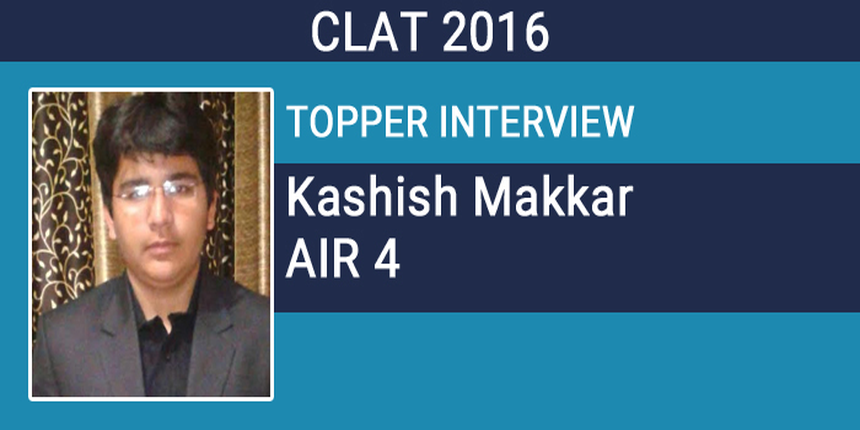 The CLAT Exam topper who loves to read non-fictional novels shares that work culture and life style of the lawyers fascinates him. Read more on different aspects of his preparation journey in this full interview below.

Careers360: Congratulations! How are you celebrating your success?
Kashish Makkar: Thank you for your wishes. I am on cloud nine! This now takes me closer to my dream law college. I am already pursuing my LLB from NLU- Patiala, but now I am keen to join NLISU Bangalore.

Careers360: What made you to choose law as a career option?
Kashish Makkar: During my 12th Board Exams last year, I was in dilemma whether to opt for a law programmes or Economics (Hons.). I had passed 12th Board Exams with 96 % marks in Commerce. I took admission for Economics (Hons.) at Hindu College, Delhi University. But, the work culture and life style of corporate lawyers still fascinated me. Thus, I decided to quit my graduation and decided to go for a good law college.

Careers360: You are already pursuing BA LLB from an NLU. How did you continue your preparation despite hectic class schedules?
Kashish Makkar: I utilised my internship breaks to continue my preparation for CLAT. I also continued appearing in mock tests and revising basic concepts. Though it was a little tough, but I knew that it is taking me closer to my dream college.

Also, being a RGNUL Patiala student I knew what to study and how to solve the questions. While Legal Aptitude section remains a challenging area for most of the applicants, I had definitely an edge in this section.

Careers360: How mock tests are helpful during preparation?
Kashish Makkar: I took as many as 100 mock tests before appearing for the common law admission test. I would have taken a number of assessment tests, mini tests comprising 10-20 questions on a regular basis.

Taking online mock tests from various resources actually boosts confidence. With each mock test, one can analyse preparation level and know improvement areas. I also learnt from my mock test mistakes and tried not to repeat them.

Careers360: What is your success mantra?
Kashish Makkar: My success mantra was to get complete hold in General Knowledge and Legal Aptitude sections. I concentrated more on GK and Current Affairs sections. I would never leave a day without revising my GK and reading newspapers.

Moreover, I took Legal Aptitude and Legal Reasoning including Legal Knowledge sections quite seriously. I regularly went through Supreme Court proceedings on national cases, which also helped me a lot. I used to solve previous years’ question papers of Legal Aptitude sections.
I would also like to credit my success to Rajneesh Singh, CLAT mentor (Founder of Do-Zen and CLAT Essentials), who offered me the support, while I was preparing for the common law admission test. It was he, who suggested me to take CLAT and made me believe that I would crack the law exam with good rank.

Careers360: You simultaneously engaged in your classes at NLU and preparations for CLAT. How would you de-stress yourself?

Kashish Makkar: Though I never felt bored or tired, sometimes I would go for walk with my friends inside the university campus.  I also enjoy swimming and it refreshes my body and mind.

Careers360: Would you like to share your hobbies?
Kashish Makkar: I love swimming, playing badminton and volleyball, listening to music and reading non-fictional books. I also like to watch thriller movies.

Careers360: What is your advice to CLAT 2017 aspirants?
Kashish Makkar: I would advise the following to law aspirants who are appearing for CLAT 2017 –

how is upes for law ? how much is application fee ? which has more chance to get into upes by clat score or by ulsat ?

NAAC committee which provides grades to Indian Universities as per their performance has awarded Grade ‘C’ to UPES because of its worst academic performance and this is the lowest grade awarded to any Indian university. Even a faculty of law from this caught was caught taking bribe from students for increasing their attendance is his course.  But overall the faculty is fairly good. The campus is neat and clean and well maintained.

For BA LLB, BBA LLB or B com LLB , the course fees for 5 years is 16.48 lakhs.The actual fees is much more than the official tuition fees. There will also be added expenses like industrial tour, summer classes, reevaluation, direct study, corticated issue, library and other activities. Considering, the overall expenses and fees structure, this college is not at all value for money.

However, this college is at a very good location.The location of UPES is just behind Mussoorie hills. There also trekking route from UPES back gate to mussoorie with a fishing point (river) in between.

how to crack clat and ailet in 2 months?

First I would suggest you to join a good coaching for CLAT preferably, to ensure that you understand the concepts of legal reasoning properly, and you have a good teacher or a senior in law school, who can help you clear your doubts in reasoning. Give at least 25–30 mock tests, and analyze them properly, recognizing your weak points. For current affairs you can refer to gktoday.in, read and re read the current affairs again and again. Maths and logical reasoning is all about practice, the more you practice the more you improve. The same goes with English, for improving your word power you can refer to word power made easy by Norman Lewis. But as you only have two months you need a rigorous practice, try to devote 7–8 hours to self study for CLAT preparation. If you are talking about studying for both CLAT and AILET simultaneously, then its difficult. But try to solve papers and have a clear understanding about the concepts.

Hope this helps! All the best.

Here are few tips for preparation you must follow to get a good score without coaching:-English: Vocabulary questions will be asked. Word Power Made Easy is the book you can use to improve your vocabulary.

CLAT is an entrance test which is organized by the Consortium of National Law Universities consisting of the representative universities. The CLAT 2020 exam will be conducted on Sunday, 21st June, 2020 from 3:00PM to 5:00PM. Registrations are open since 1st January, 2020 and will remain open until 18th May, 2020.

I hope this was helpful. Thank you

Check the link for question papers of CLAT