Indian Judicial Service Examination - Indian Judicial Service Examination or the Provincial Civil Service Judicial Examination (PCS-J) is an entry level exam for law graduates. It is not mandatory for law graduates to appear in All India Bar examination to appear for Judicial Services Examination. Through this exam law graduates can become district magistrates, additional district magistrates, or as a district court judge in India. The members are appointed by the state governments under the supervision of the respective high court, based on Judicial Services Examinations. Every High Court has under its supervision the members of the subordinate judiciary of the state that falls under its jurisdiction. Members of the subordinate judiciary (popularly known as the judicial service or the PCS (J)-Provincial Civil Service-Judicial) occupy the offices of the presiding officers of various courts right up to the post of District Judge. 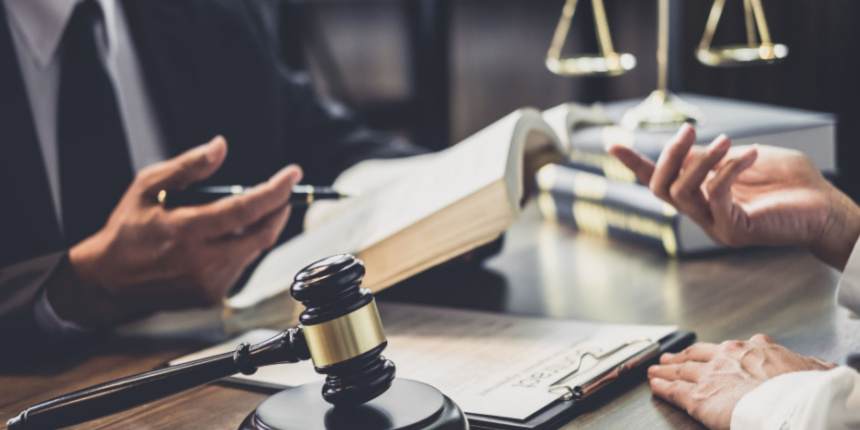 In total, 24 states in India conduct Judicial Service examinations nearly every year. These are as mentioned below.

Each of these states has its own eligibility criteria for Judicial Services Examination in the form of age limit, number of attempts, and official language, and others.

Also Read | All about All India Bar Examination

The eligibility criteria for appearing in Judicial Services Examination is:

Higher Judiciary Services – Candidates must be law graduates with a minimum number of years of litigating practice; usually seven years.

The exams for the judiciary are conducted rather unexpectedly. All the states release their application forms separately.

The exam comprises objective type questions. It only serves the purpose of screening candidates before they appear for mains. The marks secured by a candidate in this section are not considered for the final selection.

The Judicial Services Mains exams are subjective in nature, mainly comprises three to four papers. The marks scored in mains are considered for the final selection.

This is the final stage of the selection procedure. At this stage, candidates are assessed based on their general interest, intelligence, personality, etc

The syllabus for judiciary exams differs from state to state. The procedural law and substantive laws are similar for all the states, however the local language and local laws differ from state to state. The prelims syllabus for Judicial Services Examination is broadly divided into Civil law, Criminal Law and Language paper. The weightage of the language paper is around 20 per cent to 35 per cent. The mains examination consists of six to seven papers and almost 70 per cent of the questions are asked from law.

In preliminary exams the questions are covered generally from the following topics:

However, some states cover a few additional topics in their preliminary exams as provided below:

AIBE Certificate of Practice 2022 - Apply Online, How to Enrol...

Advocates to get their name on the roll record of Bar Council ...

How to Prepare for AIBE 2022? - Preparation Tips & Study Plan

Bar Council of India (BCI) releases AIBE XVII (17) 2022 exam date on its official website - allindiabarexamination.com. The officials have not yet released the information regarding the date of the exam. There is no information from the officials regarding the exam schedule yet. Keep an eye on the official website or the link below for the latest information. Bar Council of India conducts All India Bar Examination (AIBE) for 3-year LLB and 5-year LLB graduates and issues the Certificate of Practice (CoP) to the qualified candidates.

The Bar Council of India will conduct the All India Bar Examination (AIBE) XVII (17) 2022 tentatively in August 2022. The 17th bar examination will be held in offline, pen and paper mode. The officials have not yet declared any dates. Keep an eye on the official website or the link below for the latest information. The application form of AIBE XVII (17) 2022 will be released soon, at the official website - allindiabarexamination.com. https://law.careers360.com/articles/aibe-application-form

Hi I am planning to pursue LLB course in Tamilnadu. I am presently a CA, will I be permitted to enroll with State Bar Council after completion of LLB. Is there any condition that I should not earn any income during the course period. Regards Nathan

Hello Nathan, there is no such condition as not being allowed to work or earn during your LLB.  Yu are completely free to continue your CA practice during your LLB course. It might be difficult for you  to manage time when you simultaneously continue to work in two fields. However, it is completely up to you.

You will definitely be eligible to write in the State Bar Council Exam.

Can i give AIBE exam after a few years of my graduation? like example i have graduated in 2021 but i give exams in 2022 i.e after one year.

AIBE stands for All India Bar Examination , is a national level exam conducted by Bar council of India for law graduates willing to start practice of lawyers.

This exam has no limitation of number of attempts and age. Yes, you can give exam after few years of graduation any number of times.

But there is a minimum eligibility criteria of having LLB degree of minimum 3 years of duration . Please note that the exam is only conducted once a year which is of 210 minutes duration.

It will be more helpful for you to read Careers360 AIBE blog at: https://law.careers360.com/exams/aibe

I hope it covers your query.

can you provide us AIBE sample paper in gujarati langauage

So, with regard of you're query .The All India Bar Examination (AIBE) is a test that determines an advocate's ability to practise law in India. Sample papers in Gujarati are accessible on the website that I am supplying you with here:

Hope this will helps you...!

Answer later
Report
View All Questions
Have a question related to AIBE ? Ask

How to Enroll with State Bar Council for AIBE

Law graduates who stay out of practice for over 5 years have to clear AIB exam: BCI to SC

Your AIBE brochure has been successfully mailed to your registered email id .