CLAT 2015 Answer Key- The answer key of CLAT 2015 along with the Question Paper had been published by the official exam conducting authority, Ram Manohar Lohia National Law University (RMLNLU) on June 2 as CLAT 2015 Result was declared on May 20. The Answer Key of CLAT 2015 might provide a fair idea of correct answers that you had marked in CLAT 2015 Question Paper. The CLAT 2015 official Answer Key is available in this page below as released by RMLNLU. 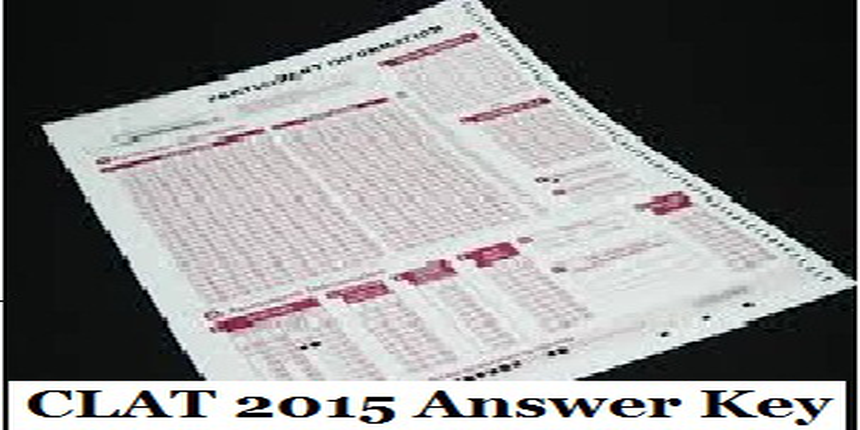 With answer key of CLAT 2015, you could actually evaluate yourself by cross-checking your responded answers with the official answers in Online CLAT 2015 as provided by RMLNLU through CLAT 2015 Official Answer Key/Solutions.

Using CLAT 2015 official answer key provided in this page, you could also evaluate your marks by verifying the answers as provided by RMLNLU against the questions of CLAT 2015.

CLAT 2015 Answer Key/Solutions had been provided in this page for each of the five sections including English, General Knowledge, Mathematics, Reasoning and Legal Aptitude. Candidates could check for the answers through Official Answer Key of CLAT 2015 and know how many of the answers were correct, thus would have been able to estimate a probable score in CLAT 2015.

Each question of CLAT 2015 Online Paper had four responses and the candidate needed to mark the best response among the provided responses on their computer screen using the mouse. The total marks allotted for CLAT 2015 was 200. Each correct response was awarded 1 mark and as per the negative marking, 0.25 marks was deducted for every incorrect response. Zero mark was awarded for the questions unanswered.

Last year, there were a total of 1660 seats distributed among all the 14 participating NLUs and 31231 candidates had registered for the exam.

Stay tuned law.careers360.com for more news and articles on CLAT 2015

Check the link for question papers of CLAT