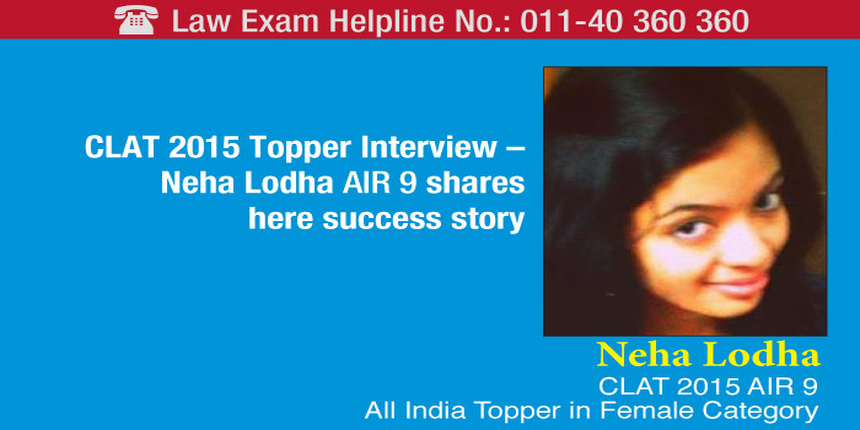 CLAT 2015 topper, Neha Lodha scored a massive 128.5 to emerge as the 9th topper in the most sought after law exam in the country. Not just that, Neha is also ranked first among the female candidates of CLAT. Coming from a family of lawyers, the topper states ‘Time management and accuracy’ as the two most important factors to consider in CLAT.

In this interview with Careers360, Neha talks about what motivated her to appear for CLAT 2015, the benefits of the new online mode and how being updated with current affairs helped her to be among the toppers of the most coveted law entrance exam in the country.

Below are the edited excerpts:

Q: Congratulations on the huge success. Were you expecting this?

A: Thank you so much! I was definitely expecting a good score. Although, being among the toppers is definitely a surprise and a good one at that. My parents are really happy. I am thankful for their support.

Q: How was your overall CLAT 2015? Was this your first attempt?

A: Well my overall score is 128.5. No, this was my second attempt. Last year I had appeared in the offline mode. My score was okay but I knew I had the potential to score more. So, I gave another try. It definitely paid off!

Q: Since, you appeared for both the modes, which one, according to you is better for test takers?

A: Well, I would go for the online mode because it is time saving- which is a very important perk in an examination. Taking the test in the online mode saved me around 10-15 minutes which was a blessing.

Q: How was the pattern of the exam?

Q: So, which were the toughest and easiest sections in the exam?

A: Well, according to me English and Logical reasoning were the toughest sections in the exam. English was both time consuming and tricky and I took some time around it. Again, for me GK was the easiest among the all the sections. It mostly had questions from current affairs and had I was prepared for that.

Q: What was your preparation strategy? How did you attempt the paper?

A:  For me, the important thing to keep in mind is time management and accuracy. CLAT paper has negative marks so the test taker needs to make sure that they do not attempt questions which are not sure of. Also, GK is the most scoring section so keeping tabs on the latest happenings is necessary.

Another important factor is mock tests. I took as many mock tests as possible. Mock tests helped me to gain an understanding of the exam.

Q: Why did you choose a career in law? What and who motivated you?

A:  Well, for starters I am passionate about this field. Mainly because I have grown up in such an environment. My grandfather was an advocate. So, is my Dad. Definitely, law is part of our family. It’s like family business cause even many of my cousins are practicing lawyers are studying law.

Q: Great! So, which college would you want to join?

A: NLSIU Bangalore is in the top of my list! Besides that, I am considering NALSAR Hyderabad and NLU Jodhpur. Jodhpur, mainly, because I live here.

Q: So, besides being involved in law studies what else are you passionate about?

A: I like painting and music a lot. Besides, I also love reading adventurous books. Sherlock Holmes tops my agenda!

Q: Do you have any tricks for future CLAT aspirants?

A: Yeah. There are two most important things to remember. Time management and accuracy.Take a lot of mock tests that helps a lot. Also, be updated with the latest happening around the world.

CLAT 2015 carried one wrong question; Test-takers get 1 bonus mark
CLAT 2015: What after the declaration of results