AILET 2016 Topper Interview: Making the most of each day helped me crack the exam, says Shubham Jain, AIR 2 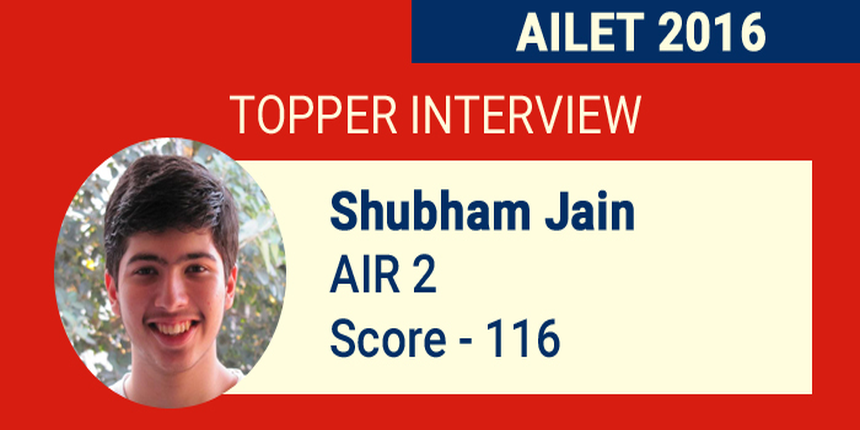 Shubham Jain, 18 years old Delhite cracked AILET 2016 and bagged AIR 2 with a score of 116. Careers360 interviews this AILET Exam 2016 Topper where the avid key-board player shares his success mantra of cracking the all India law entrance test. In the interview, Shubham shares that his reading habits proved useful in solving English and Comprehension section. The guitarist attributes his success in the exam to eclectic reading.

Latest - Know all about AILET 2017 such as important dates, application and admit card.

An aspiring environmental lawyer, Shubham has keen interest in protecting the environment and shows concern about the degradation and depletion of nature. Since he was in class 10th, the AILET topper realised his inner calling of being a lawyer based on his debating skills, unlike his engineer parents. During his conversation with Careers360, the young lad shared that he follows law.careers360.com on weekly basis.

Read below excerpts from the exclusive interview.

Careers360: Congratulations on bagging AIR 2! How are you celebrating your success?
Shubham Jain: Thank you! It’s quite a pleasure. Initially, as AILET 2016 Results were out, I could not believe that I have secured AIR 2. Though I was confident enough to crack the law entrance, but AIR 2 with 116 marks was beyond my comprehension. I would celebrate this success with my grandparents.

Careers360: How did your preparation help you in cracking the law exam? Was it difficult for you?
Shubham Jain: My preparation strategy stood on only two pillars– revise and practice. I used to revise the subjects and their concepts and once done, would practice to know where I stood. Practicing previous years’ question papers were of great help to analyse my preparation level. I began intrinsic preparation for law entrances, since the beginning of 11th class. In November-December, I would devote at least 2 hours daily for law exam preparation and rest of the study time for 12th boards. In the months of January and February, as I had my pre-boards, so I increased my study time for law entrance from 2 to 6 hours, while dedicated 3-4 hours to 12th boards. Post my 12th boards, I would study rigorously for 10-12 hours for law entrance.

It was really difficult for me to juggle between board exams and law entrance preparation and maintaining a balance between the two.

Shubham Jain: I would devise a section wise strategy, devoting more time to the difficult sections. As I was weaker in General Knowledge and Legal Aptitude sections, I would study these sections for 5-6 every day. For English, Logical Reasoning and Mathematics, my study regime would include 2 hours each.

Careers360: What were the rejuvenating activities that you did during your preparatory days?
Shubham Jain: To rejuvenate myself, I would do coding. Though I am a commerce student, but I have a passion for programme coding. I have learnt it from my mother, who is a software engineer. I used to code programmes through C++ and Python, however, at very basic level. This activity made me feel that I am not wasting my precious time. After utilizing my time in coding, I would feel relaxed, and again be ready for the exam preparation.

Careers360: Tell us something about your hobbies?
Shubham Jain: Reading various story books and newspapers, playing key-board and creating some musical tunes from guitar, badminton and basketball are some of my hobbies. But amongst all, I love reading books the most.

Careers360: Coaching guidance and mock tests are important to crack entrance exams like AILET. What do you have to say on this?
Shubham Jain: Of course, coaching helps. Taking guidance from Career Launcher has helped me a lot. The faculty there helps you in learning tricks for solving questions. Coaching also helps you in clearing your doubts about the topics.

In my view, mock tests help a candidate in evaluating the preparation level. I used to analyse my mock test results and would realize where I was lacking. Taking mock tests at regular intervals made me analyse the question pattern in a better way, which further helped me in scoring more than my previous attempt.

Careers360: While your law entrance examinations kept you busy, did your preparation schedule leave you with some breathing space for movies, etc? Do you like movies? If yes, which was the last movie that you have seen?
Shubham Jain: Though I like movies, but seriously, I did not have time or would ‘restrict’ myself from any such activity. I could not even afford to relax on weekends. However, as it was on my ‘must watch-list’, I recently saw ‘Interstellar’, after waiting for two and a half years.

Careers360: Any suggestions for your juniors or AILET aspirants who shall be taking the law entrance in 2017?
Shubham Jain: I would just share some basic tips–

Thank you. We wish you luck for all your future endeavours!

AILET is All India Law Entrance Test conducted by NLU Delhi for admissions to as many as 81 BA LLB seats. Result of AILET 2016 was announced on May 18, in which out of a total of 15,916 test-takers, 73 candidates got shortlisted for admissions to five-year integrated law programmes.

Stay tuned to law.careers360.com for more news and feature articles on AILET Toppers