CLAT 2017 result announced on May 29 late night unlocked the fate of 47,108 test takers who appeared in the May 14th CNLU administered Common Law Admission Test. The announced CLAT results 2017 specify the CLAT scores out of 196 marks, as four questions of one mark each have been scrapped. According to the declared CLAT merit list 2017, Rajat Sahoo has secured the first position in CLAT 2017. The Jaipur boy scored 154.25 marks as per the CLAT results 2017 to bag the All India Rank (AIR) 1 in the national-level law entrance examination. Careers360 brings you the CLAT toppers 2017 profiles.
LATEST - CLAT 2018 application form has been released; Apply now! 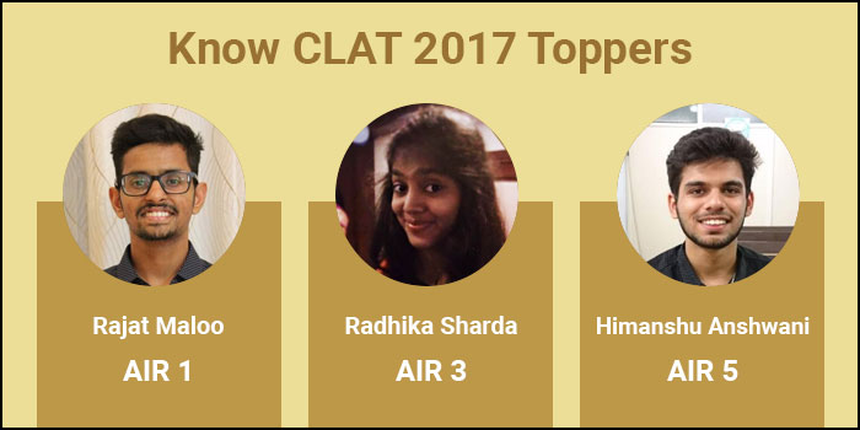 The AIR 1 of CLAT 2017 hails from Jaipur, Rajasthan. Rajat Maloo, a Science stream candidate of Jayshree Periwal High School has scored 74.8 per cent marks in his Class 12th board results.

A Marathi domicile candidate from Mumbai, Vihit Ashish Shah secured the second position in CLAT 2017 scoring 150.25 out of total 196 marks.

The Rajasthan girl has secured the third position in CLAT 2017 scoring 148.5 marks.

The student from Bhopal, who secured the fifth position across All India completed his Higher Secondary Schooling from Bal Bhavan School, Bhopal. A huge Breaking Bad fan, Himanshu is also a football afficionado, considering Real Madrid and Manchester United as his favorite clubs. He is also fond of listening to Hardwell and often plays car racing games online.

Stay tuned to www.law.careers360.com for more feature and updates on CLAT